This post covers the best free dual camera apps for Android. For many years, smartphones are coming with multiple camera setups. It started with a reading camera, then the front, camera, and more cameras at the back. But the stock camera apps only let you use one camera at a time. Most smartphones nowadays have more than enough processing power to run two cameras simultaneously.

There are many third-party camera apps in the Play Store that let you use two cameras at a time. Such dual camera apps load both, front and rear, cameras at the same time. As a result, you get a dual camera view. Different apps have different approaches to this. Some apps provide multiple layouts where you can pick the position of both cameras. The blogging view and the split-screen view are two popular layouts. Apart from that, some apps offer options like color filters, picture quality, camera settings, etc. I covered 6 dual camera apps that you can check out by going through this post.

Double Side Camera is my favorite app on this list to use both cameras at the same time. This app offers four camera layouts where you can drag to change the position of the camera feed. It also has a camera toggle that lets you interchange the cameras in the layout. Lastly, the built-in quality setting lets you set the picture quality as per your requirements. The best part of this app is that it is ad-free. You can use it anytime right away without dealing with intrusive ads.

Double Side Camera is a free dual camera app for Android. When you launch this app, it instantly starts both rear and front cameras. By default, it shows the front camera feed in a circle while the rear camera feed fills the screen. You can easily drag the circle to reposition the camera feed that is on the top. It has four buttons at the bottom including a photo shutter and a video recording button in the middle. The button on the right side lets you pick camera layouts.

This app has four layouts. Out of 4, 3 layouts have the rear camera feed filling the screen with the front camera feed in a small circle, square, and rectangle. Whereas the fourth layout option has the front and rear camera feed in the top half and the bottom half of the screen respectively. Along with the layouts, you also get an option to set the picture quality to low or high. Then there is a camera toggle button on the left. This button interchanges the camera position no matter the layout. With all that, you can pick a mode of your choice and take dual camera pictures and record videos. 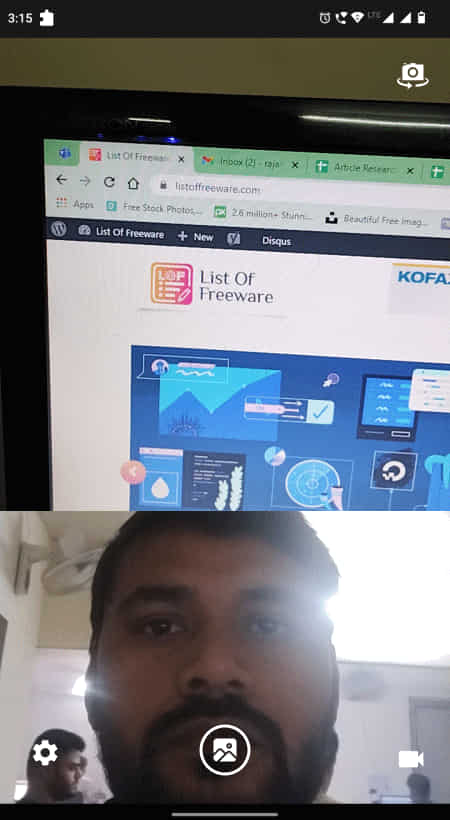 Dual Camera: Front & Back Cam is another free dual camera app for Android. The first thing you notice about this app is that it has ads. The app opens at a screen where it shows a message that the app might not work with some devices. Then there are two buttons at the top and bottom. The top button loads a dual camera where you can easily switch between photo and video mode. Whereas the second button is for unsupported devices and takes photos only. This mode uses one camera at a time and then combines both photos into a single dual-camera layout.

Now whenever you launch any of these modes, it loads a fullscreen ad. You have to wait a few seconds and precisely hit the cross button to get to close the ad and get to the mode. The dual camera mode divides the screen into two halves and shows the front and rear camera feed in those halves. You can toggle the cameras to change the position. You can also change the dual mode layout from vertical to horizontal. Then you can switch between photo or video mode using the button on the bottom right and shoot in dual camera mode. 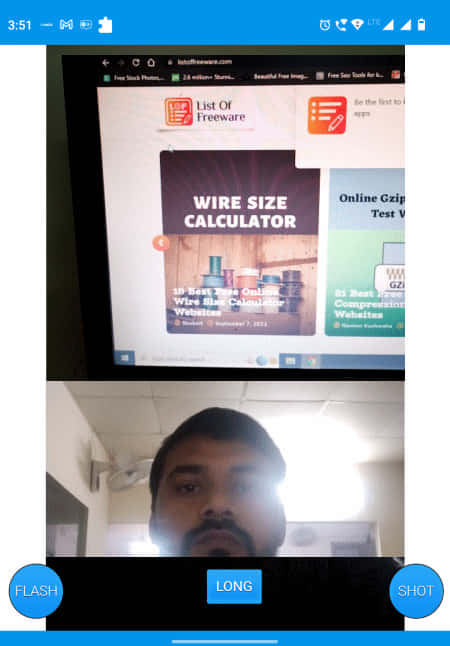 Double Cam App is a simple dual camera app for Android. This app has a minimalistic UI and does not have any ads. When you launch the app, it opens the dual camera mode where you can take pictures with front and rear cameras. By default, it loads a vertical split-screen camera layout. With the button in the bottom center, you can toggle the layout. The other layout shows the front camera in a circle over the back camera. You can pick a layout of your choice and take photos using two cameras on your Android device. 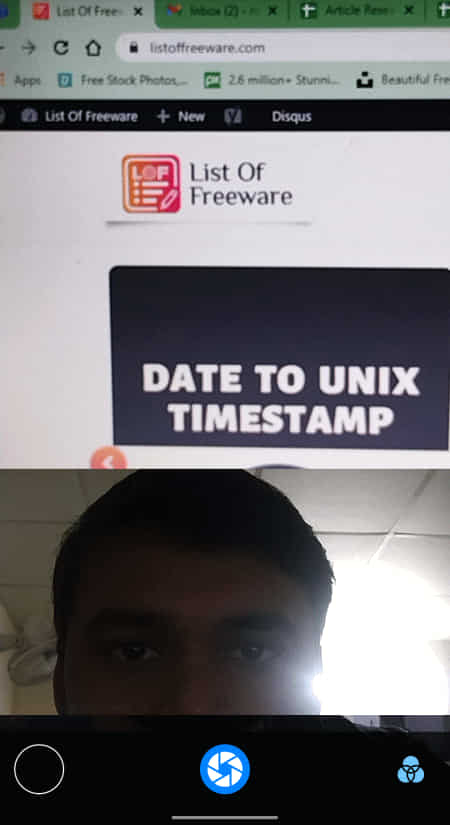 Dual Camera Front Back Camera is another free dual camera app for Android. This app can only take dual camera photos and not record videos. The start screen of the app shows two options on the screen. The first option opens the dual camera and the second one takes you to captured photos.

The dual camera has a single vertical layout that splits the screen into the top and bottom halves. You get a toggle to change the camera positions as per your needs. Alongside the capture button, you get one more button to access the color filters. You can select and apply any filter in real-time and take dual camera photos. This app is a little slow but it does not show ads which makes it a bit easy to use. 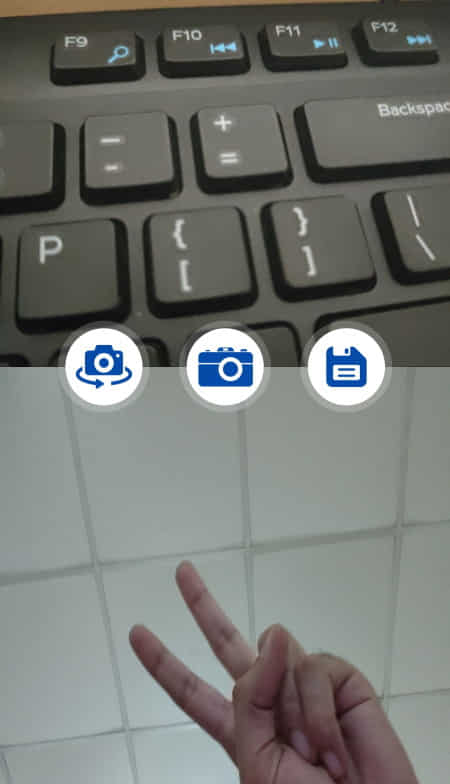 Dual Camera-Smart View is another free dual camera app for Android. This app is a bit different from other apps covered so far. It can not actually load both cameras at the same time. Instead, it loads the one camera first. You can align it and take photos. Then it loads the second camera and you can do the same. This app uses a vertical split-screen layout to do so. In the end, you get a single photo with both pictures in it. That’s pretty much all you get in this app. There is no option to change the layout or record a video. And, the app has many ads. The first launch of the app takes time as it fetches ads to start with. Even the start button for the dual camera mode gets overlapped by the ads. 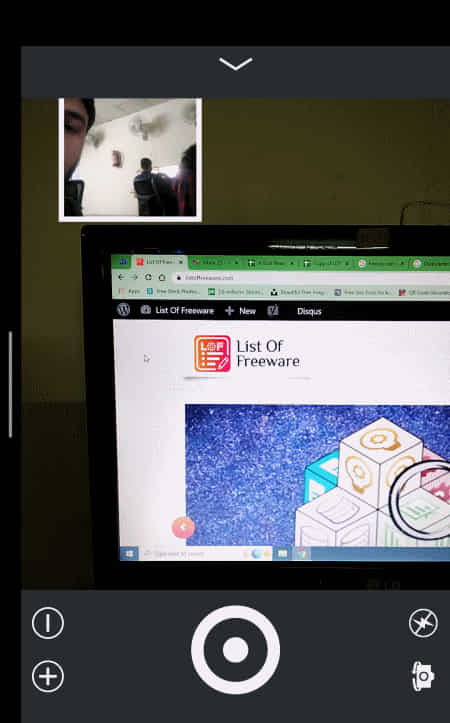 Smart Front Back Dual Camera is a free Android app that you can use to take dual camera pictures. This app has a PiP-style layout where the rear camera is the background and the front camera is a circular shape over it. It lets you drag the front camera to change its position in the layout. This app capture from one camera at a time and then switches to another one. This way it takes pictures from both the cameras consecutively and presents those in a single frame. While taking pictures, you have the option to apply a color filter and choose which camera to use first. You also get zoom and flash options that you can use at your convenience. Apart from that, you can set the resolution for both cameras in the settings. You can also define camera switch delay, volume shutter, flip selfie, and other options. All of this makes it a decent app to take photos that appears to be a dual camera layout.