Here is a list of best free scientific graph software for Windows. Using these software, you can create graphs using mathematical and scientific equations. Along with scientific graphs, you can also plot standard XY-coordinate graphs. Some of the most common types of graphs that these software can plot are function f(x) graph, line graph, and bar graph. Apart from these graphs, you can also generate 3D graphs using both equations and coordinates. To generate any type of graph, you can manually provide equations and coordiantes or import data file containing the input values. According to the input value, you will get the appropriate scientific graph. In most software, you can easily save the graph in various formats PDF, JPG, PNG, SVG, etc.

SciDAVis is my favorite software because it lets you create both coordinate and equation based scientific graphs. Plus, its ability to generate various types of 3D graphs using the same coordinate and equations is also impressive. In addition to plot graphs, it can also be used to analyze output graphs and values. 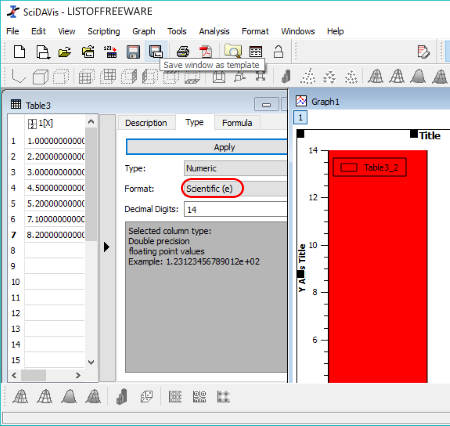 In order to plot graphs, you need to create a table with two columns for 2D graphs and three columns for 3D graphs. After that, enter the coordinates values in the table. In the table, you also get a Type menu from where you can change the coordinate format to Scientific (E) or Scientific (e) values. A Formula Menu is also present in the Table to enter scientific formulas. Now, to plot graph, just go to Plot menu and select a graph from various available ones to plot the desired graph. To get a proper look at the graph, you can use Zoom In/Out and Best-Fit tools. After viewing the scientific graph, you can save the graph as BMP, EPS, GIF, PDF, JPG, etc. formats.

In this software, you also get various analysis tools like Interpolate, FFT, Differentiate Integrate, etc. Plus, for 3D graphs, it provides various additional tools to change the orientation of the 3D graph such as front grid, back grid, floor grid, reset rotation, etc. 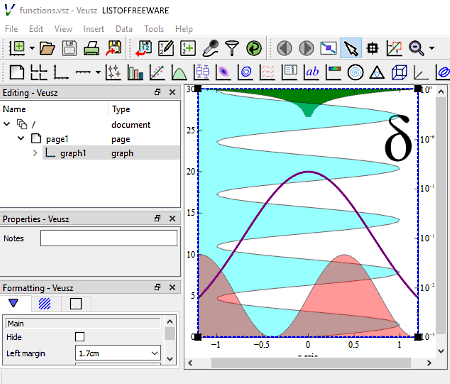 Veusz is a free open source scientific graph software for Windows. In this software, you can produce production-ready 2D and 3D graphs. The process of creating a 2D or 3D scientific graph is pretty simple as you just need to import a coordinate file of CSV, TXT, HDF5, or FITS format to generate graphs. In it, you cannot directly add graph coordinates to this software which is a small drawback of this software. To convert coordinates to a graph, you need to add X, Y, and Z coordinates of the graph with the columns of the imported coordinates’ file using its Properties field. After that, select the type of graph that you want to plot from its toolbar such as Points, Bar Chart, Function To Data, Function, Vector Field, Box Plots, etc. As soon as values of coordinate columns get attached with the coordinates (X, Y, and Z), you can immediately view the resultant graph. The resultant graph can easily be exported as SVG, PDF, EMF, PNG, JPG, BMP, etc. formats.

In this software, you cannot only create simple graphs with black outlines and white background, but fully colored graphs can also be created in it. You can use its Color menu to define different colors to highlight different aspects of the graph. Plus, it also lets you add 3D elements, grid, label, shapes, etc. to existing graphs. Overall, it is really good software to create 2D and 3D scientific graphs. 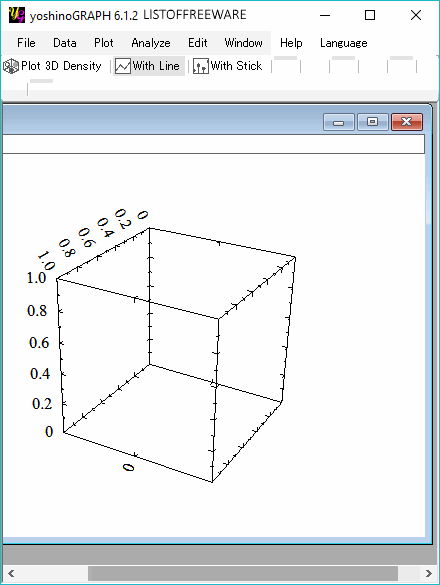 YoshinoGraph is another free scientific graph software for Windows. It is used to create scientific graphs for data analysis. In it, you can quickly create 2D and 3D graphs from data files of TXT and CSV formats. After importing coordinates or data, you can choose the type of graph plotting method (Circle, Dot, Symbol, Density, and Vector) from its Plot section. In the case of the 3D graph, you can select one of the three available 3D graph plotting methods namely 3D circle, 3D Dot, and 3D Density. Besides this, you can also add grid to the background of the graphs to get the classic graph view. To draw scientific graphs, it provides an Expression option that allows you to draw graphs according to mathematical or scientific expressions like y=sin x, y= 1/2 cos x, etc.

This software also comes with a dedicated Analyze menu that allows you to convert plot data, set data point, and set plot range. Plus, options to manually define plot lines, regression lines, Gaussian curve, and arbitrary function for graph analysis is also present in the Analyze menu. After plotting and analyzing the scientific graph, you can save it as EMF, BMP, and PNG formats. 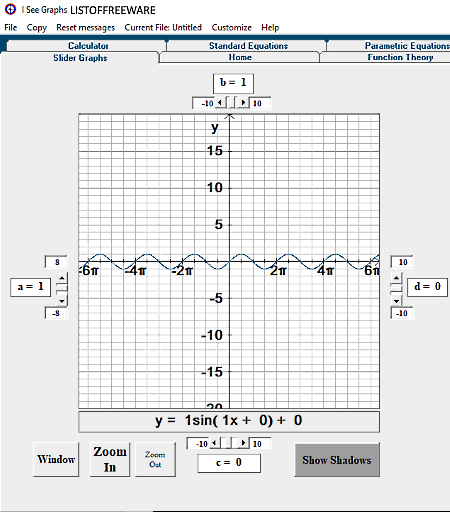 I See Graphs is yet another free scientific graph software for Windows. This software is specially designed for teachers to teach graph making process to their students. Using it, you can easily create various different types of scientific graphs like Slider Graphs, Function Theory, Inequalities, Probability, 3D Graphs, Matrices, and more. For each type of graph, it provides a dedicated section. By going to a specific section, you can input equations and coordinate values to plot the graph. Within each section, you get the corresponding graph, but you cannot export or save the graph. However, you can still save data and equations as DAC and IC files respectively. After plotting the graph, you can use Zoom In, Zoom Out, and Show Shadows tools to analyze the graph.

This software also comes with a fully fledged scientific calculator to help you solve equations. Apart from various tools and features, it also provides a really customizable interface that lets you select any combination of primary and secondary colors. 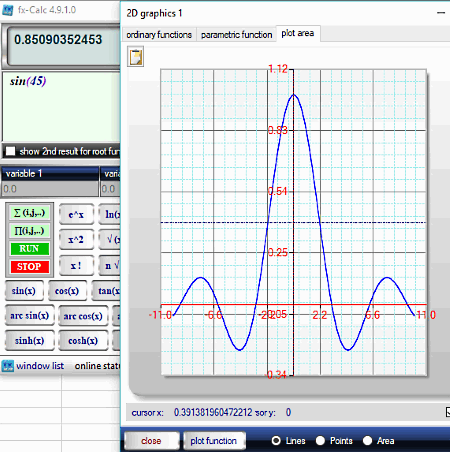 Overall, it is pretty easy to plot scientific graphs in this software, but this software does not allow you to save any of the graphs. 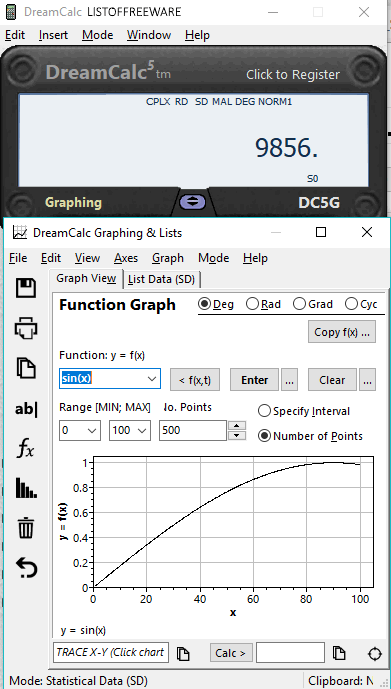 Dream Calc is a free scientific calculator software that also lets you plot scientific graphs. The main interface of this software is dominated by a virtual scientific calculator in which you can perform complex calculations. To access its Graphing feature, you need to press the F12 hotkey or access it from its Windows Menu. Using its graphing section, you can plot X-Y Graph, Scatter Plot, Line & Point, Bars, along with advanced Function graphs.

To draw coordinate (X and Y) based graphs namely X-Y graph, Scatter Plot, Line & Point, and Bar graphs, you need to input coordinates on the List data tab of Graphing Section. Now, to plot function based graphs, you need to enter equations like y=sin(x), y=cos(x), etc. in the Graph View tab of Graphing section. At any time, you can also change the unit of input coordinates to Degree, Radian, Grad, and Cycle to get output graph accordingly. The resultant graph can be viewed from the Graph View tab that you can also save as JPG, BMP, and EMF image formats. 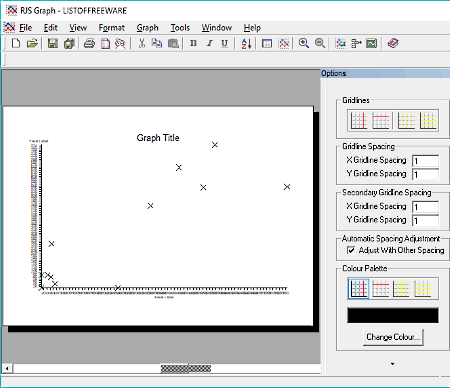