4K resolution videos use a lot of system resources and sometimes lag occurs due to lack of system resources. So, I will recommend to not use absolutely low-end system if you want to play a 4K video. These 4K video players can also use hardware acceleration to provide smooth 4k experience.

Overall, any one of the mentioned video players can play 4K videos, but only some can play it smoothly.

Leawo Blue-ray Player is my favorite 4K video player because it played 4K videos for me more smoothly than the other players. Plus, its ability to use hardware acceleration and support of many media formats make it a good choice. 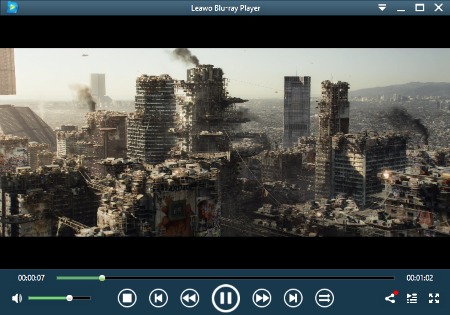 Leawo Blu-ray Player is a free 4K video player for Windows. It plays 4K video smoothly without any lag at 29 frames per second. You can also play normal audio and video files in it. All common features that you expect in a media player are present in it. I like its sleek and simple interface that makes watching 4k videos more enjoyable.

This player can also use hardware acceleration when needed to provide uninterrupted 4K experience. For laptop users, it provides a power saver mode that automatically warns you when battery is less than 10%, and closes video playback at 5% battery. Other than that, its Blu-ray support, subtitles support and ability to take screenshots make it a great media player.

In this 4K video player, you can play 4k video of various formats such as MP4, MKV, FLV, AVI, MPEG, WMV, and more. 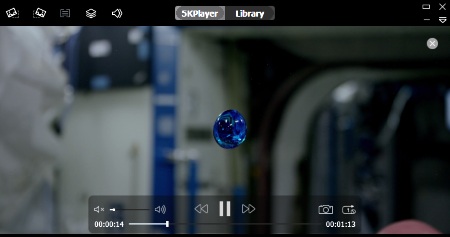 5K Player is another great free 4K video player in this list. It provides seamless video playback of 4K videos. Both video and audio quality of this player are amazing. It is a simple to use video player that enhances the experience of watching any 4k video.

It has a built-in hardware accelerator that you can enable if a video starts to look choppy. Hardware accelerator uses extra system resources to provide seamless video playback. This player also provides a dedicated library where you can make playlists of music, movies, videos, etc., to enjoy them later.

Besides playing media, you can use it to stream online videos as well as download online videos. In both the cases, you need to provide video URL that you want to stream or download. This 4k player even supports Apple AirPlay, through which you can wirelessly stream contents of Apple devices including video, photos, files, etc.

In my opinion, it is one the most up to date video player that handles 4k videos pretty well. Plus, its up to date features like Airplay make it really stand apart. You can also play a 360 degree video in it. 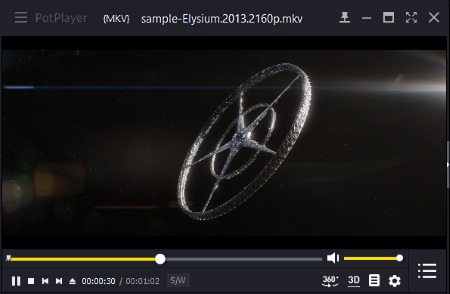 POT Player is another free 4K video player for Windows. It is also a reasonably good video player that can play a video of resolution up to 4096*2160. It can surely play 4k videos, but video playback is slightly laggy when compared to other media players.

It uses advanced enhanced H/W – Acceleration that provides the maximum performance using minimum resources. It already comes with a lot of codecs, still if you want to add more codecs, then you can do that as it supports open codecs.

Along with 4k videos, it can also play 3D videos and VR 360 degree videos. Its 3D feature is very advanced because it supports different types of 3D glasses. Plus, it can play 3D videos using side by side, top and bottom, and page flipping techniques.

Pot player comes with many small, but useful features like hotkeys to take video snapshot, option to set video aspect ratio, set video rotation, and more. If you need a 4k player that can also play 3D and 360-degree videos, then it is good option to consider. 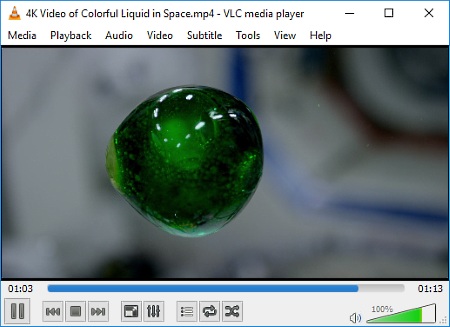 VLC Media Player is one of the most popular and open source media player for Windows. It is already famous for its ability to handle lots of audio and video formats. If your VLC player is not able to play 4k videos, then just update it and enjoy 4K videos. Its newer version supports 4k videos.

Its 4k feature is quite new, due to which some lag can be experienced while playing 4k videos. Due to this reason, it is not on the top spot. If you are experiencing a lot of lag, then disable its hardware accelerated decoding by going to Tools > Preferences > Input/Codecs.

More VLC features that you might like are subtitles support, plugins support, track synchronization, effects, filters, and customizable interface. 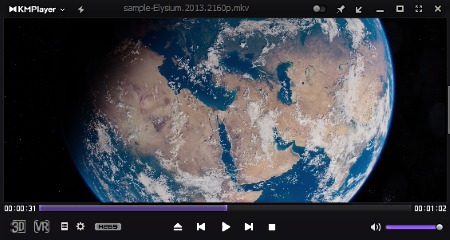 KMPlayer is an advanced 4k video player for Windows. It is capable of playing 4K, 3D, and 360 degrees VR videos. The playback quality of this player is quite good with just small stutter here and there. This player uses the latest H.265 codec, that allows this player to run 4k video even in some low-end CPU’s.

This 4k player is already packed with all kinds of codecs, so you don’t have to install any additional codecs for different formats of videos. It natively supports various popular media formats like MP4, AVI, MPEG, WMV, OGG, WMA, AAC, etc.

In this player, I also like its 3D and 360-degree video playback quality. Option to play 3D and VR videos are present on the main interface. By clicking on the respective 3D and VR buttons, you can view even normal videos in 3D or in VR view. 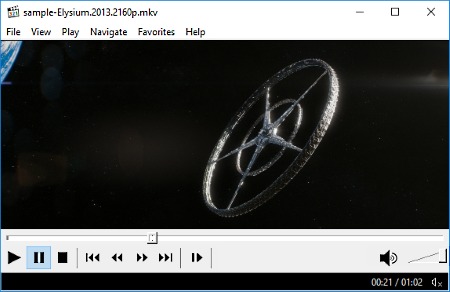 Media Player Classic is a free and open source 4K video player for Windows. It has one of the dullest user interface, but its 4k video playback is one of the smoothest. In this player, you don’t have to enable any option to play 4K videos, just drop a 4k video and enjoy.

This media player comes with lots of codecs, but if it needs a codec, it automatically informs you about it. Being a lightweight software, it does not stress the CPU that much. Plus, their official website also claims to play movies on old generation SSE2 CPU’s.

It has one feature that many other 4k players don’t have named DVB player. Using this DVB player, you can watch digital TV on your PC. But, a DVB card is required to connect with cable TV network.

Many conventional video and audio formats like MP4, MPEG, AVI, WMV, AAC, MP3, and more are supported by it. If you go into its settings, you can find options like screen capture, Rendering settings (Vsync, GPU control), shaders, filters, etc. Overall, it is a simple and easy to use 4k player with a good set of features. 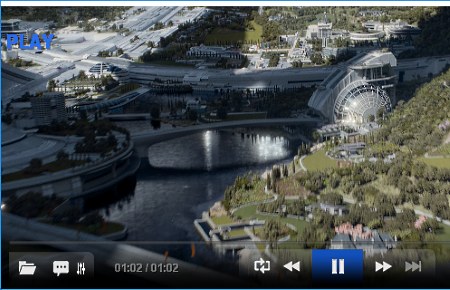 ALLPlayer is a completely free 4K video player for Windows.  This player always provides consistent frame rates, and makes it fun watching a 4k video. According to its name, it can almost play all types of audio and video files. Some of the media formats that it supports are AVI, WMV, MP3, MKV, OGG, MP3, AAC, etc.

This 4k player also offers free internet radio, computer reader (to readout subtitles), parental control (to password protect some videos), and option to search TV shows and movies. Its specialty is to search and download subtitles for a movie or video in multiple languages. Besides various features, some tools are also available through which you can add cover to a video and download missing video codecs. 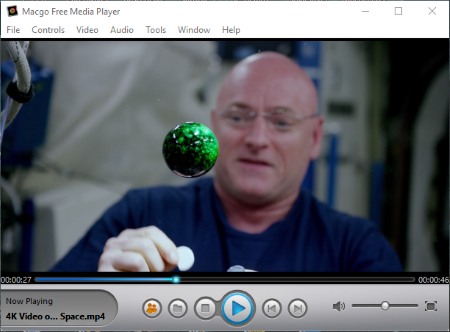 Macgo Free Media Player is yet another 4k video player for Windows 10. This player is capable to play video of resolution up to 3840*2460 at 29 frames per second. Using this 4k video player, you can enjoy 4k videos with DTS 5.1 audio. During testing, I have noticed a few frame drops, still overall video playback is quite good.

In terms of audio quality, it is one of the best 4k video player as it comes with DTS 5.1, Dolby TrueHD audio, and DTS-HD Master Audio.

In a nutshell, this is one of those 4k video player software that can provide both impressive visual and audio quality. 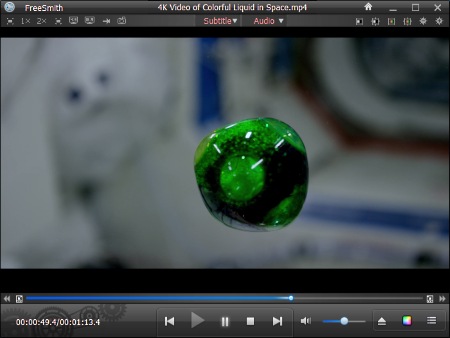 FreeSmith Video Player is yet another 4k video player for Windows. It can play SD, HD, FHD, 2K, and 4K videos. You can directly drag and drop a video file on its interface to play it. 4k video playback of this player is respectable. If you have the latest hardware, then you will be able to enjoy 4k videos smoothly with this player.

This player provides various handy shortcuts on the interface like screenshot, aspect ratio (16:9, 4:3), subtitles, contrast, and brightness control. All these shortcuts allow you to quickly make the necessary changes on video to get a better viewing experience.

This 4k video player is now discontinued, and you will not get any further updates. Still, it fulfills the main aim which is playing 4k videos. Its lack of modern features and no future support drop this player at the bottom of this 4k video player list.