Prior to conversion to ICO format, you can edit AI images with tools provided in these converters. Some of the commonly provided editing tools in these software include resize, crop, flip, add watermark, add border, color profile adjustment options, and various filters and effects. All these let you view AI images before you proceed to conversion.

All in all, these are handy software which let you perform a lot more image related tasks other than converting AI to ICO. The steps of conversion are also easy and you won’t face any difficulty to get the output ICO images. You can go through the list to know more about these software.

My Favorite AI to ICO Converter Software for Windows:

XnConvert is my favorite software to convert AI to ICO as it supports batch image conversion. It supports a lot more formats for conversion and provides you several handy image editing options. 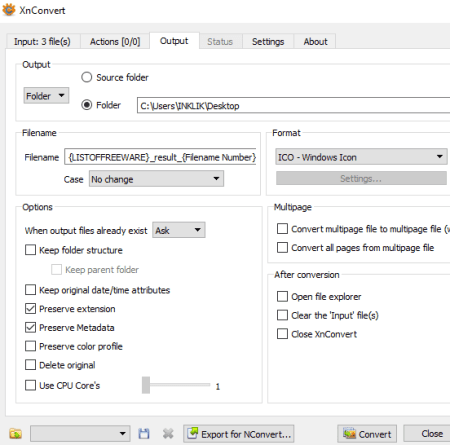 XnConvert is a free AI to ICO converter software for Windows, Mac, and Linux. Using it, you can not only convert one but multiple AI images to ICO format at once. Other than ICO, it supports a lot more output formats to convert AI images to, such as JPG, JXR, PNG, TIFF, GIF, BMP, PSD, PS, IMG, EMF, WEBP, etc.

How to convert one or multiple AI images to ICO using XnConvert:

It contains a Hot Folder feature using which you can specify particular folders which will be continuously monitored. Whenever new images are added to those folders, it converts them to another format using last saved settings.

XnConvert is one of the best image converter software which lets you batch edit AI images as well as batch convert AI to ICO images. 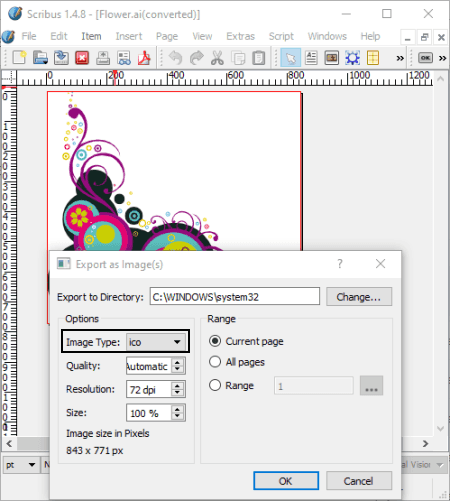 Scribus is an open source desktop publishing which can be used to convert AI to ICO. It lets you simply open an AI image in it and then save it in any other format including ICO. Other supported output formats in it include PNG, JPG, EPS, SVG, PNG, BMP, TIFF, etc. Before starting AI to ICO conversion, you can edit the input AI image with available tools like insert text frame, insert shape, insert line, modify colors, replace colors, etc.

How to convert AI to ICO in Scribus:

Scribus is another good alternative to a free AI to ICO converter. It is primarily used to create graphic designs like brochures, business cards, newsletters, PDF presentations, etc. 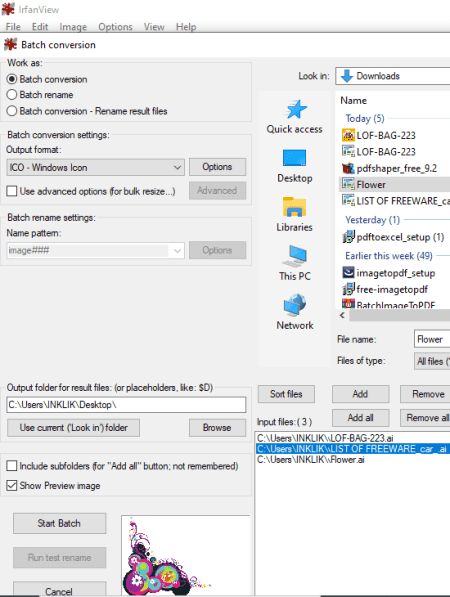 IrfanView is another free AI to ICO converter software for Windows. It is basically a graphics viewer which supports tons of image formats to view. It also provides a batch conversion tool which can be used to convert images from one format to another. Using this tool, you can quickly convert multiple AI images to ICO format simultaneously. Also, you can convert AI images to other formats including JPEG, JLS, JNG, JPM, JP2, GIF, PNG, ICO, WEBP, BMP, TGA, ECW, TIF, etc.

Another advantage of this software is that it provides a set of standard image editing options which can be used to modify imported AI files prior to conversion to ICO. Crop, resize, set DPI value, flip, add watermark, enhance color profile, replace color, etc.

Do remember that you first need to install IrfanView Plugin before trying to convert AI to ICO using it. This is because it doesn’t support AI and some other formats by default.

How to convert AI to ICO in IrfanView:

It can be used for free for non-commercial use only.

IrfanView is quite a versatile software with image viewing, editing, and conversion abilities. You can use it to easily convert multiple AI images to ICO format at once. 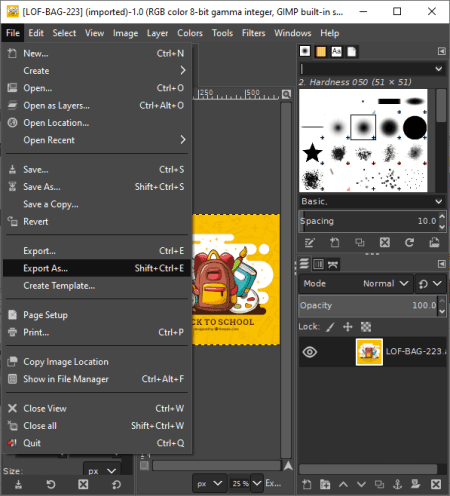 GIMP is a featured graphics editing software which can also be used as an AI to ICO converter. It lets you open an AI image, view and edit it, and then export it to ICO format. Besides ICO, it supports JPEG, XHTML, HTML, EPS, GIF, HEIC, MNG, TGA, TIFF, WEBP, BMP, PCX, ORA, FITS, and more formats. Let’s see a sorted procedure of converting AI to ICO in GIMP.

How to convert AI to ICO in GIMP:

GIMP is one of the advanced image editing software which you can also use to convert AI to ICO.

Inkscape is an open source AI to ICO converter software for Windows, Mac, and  Linux. It is basically a vector graphics editor using which you can create or edit various images. To be able to convert AI to ICO using it, you need to use it through the command line. Let’s checkout the commands and steps which you require to perform AI to ICO conversion.

How to convert AI to ICO using Inkscape:

To simply convert AI to ICO, firstly, create a batch file. And to do that, open Notepad and write the command with this syntax: <inkscape exe path> -z <input AI file with its path> -e <output ICO image with its destination path>. Your final command will look like this:

After writing the command, save the file with .bat extension. Finally, run this batch file in order to convert AI to ICO.

You can also batch convert AI to ICO by repeating the same command for multiple AI images.

Inkscape is a nice software to convert AI to ICO using commands. Through command line, you can also batch convert SVG to PNG, AI to JPG, AI to PNG. etc.