Here is a list of best free AIFF to WAV converter software for Windows. Both AIFF and WAV are uncompressed audio formats and they hardly have a difference in audio quality. Still, when you need to convert AIFF to WAV, here is a sorted list of AIFF To WAV converters. In most of these converters, you can also perform batch AIFF to WAV conversion for better efficiency. Besides AIFF and WAV, you can also perform audio conversion between various popular formats such as MP3, MP2, AAC, WMA, OGG, FLAC, AC3, etc.

Additionally, most of these software let you manage bit-rate, sampling rate, number of channels, etc. settings. In some of these, you can also specify bitrate mode (VBR, CBR, etc.) and channel encoding, channels, etc.

My Favorite AIFF To WAV Converter Software For Windows:

AIMP is my favorite software because it performs both batch and parallel AIFF to WAV audio conversion. It also lets you increase the number of threads to further increase the rate of conversion. In it, you can also modify audio parameters and also preview audio in its inbuilt audio player.

You can also check out lists of best free Batch Audio Converter, Audio To Video Converter, and WAV to FLAC Converter software for Windows. 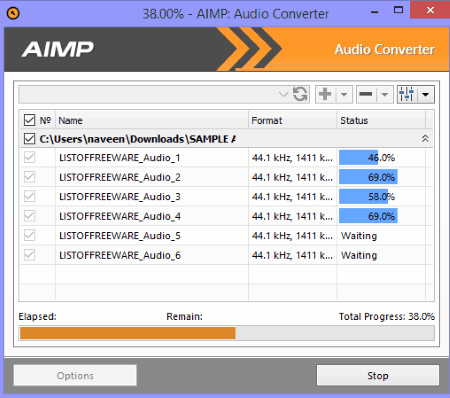 To access its audio converter, you need to go to Menu > Utilities > Audio Converter. In its audio converter, you can easily perform batch AIFF to WAV audio conversion. This converter is really fast as it processes 4 audio files at a time. Plus, you also get some additional features such as Threads (to further improve conversion speed), Tracker Music (to turn on/off surround sound and ramping), Resampling (to choose between conversion speed and audio quality ), Anti-Clipping (it prevents scratch sound and noise), Parameters (to modify sample rate, channels, and sample format), etc.

Now to convert AIFF to WAV, first, add one or more AIFF audio files and select WAV from the output menu. Then, tweak audio settings from the options menu if necessary. At last, press the Start Button to get WAV output. 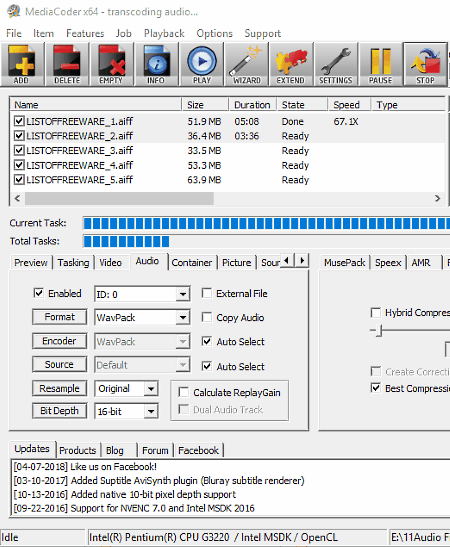 Media Coder or Audio coder is a powerful AIFF to WAV converter software for Windows. Through this software, you can convert multiple AIFF files to WAV format. This software is also capable of performing format conversion of up to 8 files simultaneously which significantly reduces the conversion time. Plus, it can encode audio files of both lossless (FLAC, ALAC, TTA, PCM, etc.) and lossy (MP3, MPEG audio, WMA, AMR, etc.) formats.

To convert AIFF to WAV, first, add all the AIFF audio files by pressing the Add button and then go to the Audio Section and select WavPack from Format Menu. If you don’t want to make modifications before conversion, then just press the Start Button to initiate the conversion process. But, if you want to make changes on audio before conversion, then use menus like Bit-depth, Resample, Compression Level, etc. to vary audio properties of input AIFF files.

Apart from audio, you can also convert and encode video from one format to another. In it, you also get some handy features namely, Integrated Audio Codecs (FLAC, TTA, LAME MP3, FAAC, etc.), 2-pass normalization, and CUE & M3U playlist support. 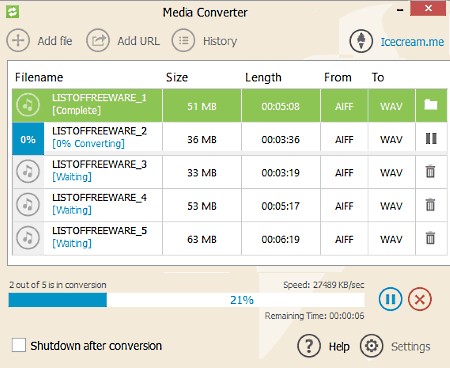 Icecream Media Converter is another free AIFF to WAV converter software for Windows. It is a user-friendly software through which, you can batch convert multiple AIFF files to WAV format. The reverse conversion from WAV to AIFF is also possible in this software. Apart from WAV and AIFF, this software supports more input and output formats such as AAC, MP3, WMA, OGG, M4A, FLAC, etc. In this software, it is also possible to optimize audio file of various formats according to devices like Apple iPhone, iPad, Sony PS3, Windows Phone, etc.

In order to convert AIFF to WAV, first, drop one or more AIFF files to its interface. After that, a Settings Menu will open up from where, you can select the quality of audio (Best, Good, Average, and Bad) as well as output format i.e. WAV in this case. Lastly, click on the CONVERT Button to start the conversion. 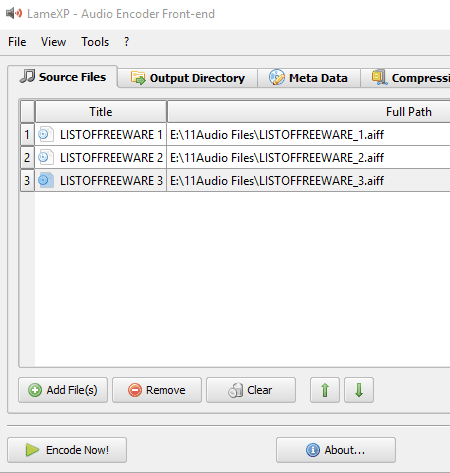 In this audio converter, you also get some dedicated sections to change audio parameters and properties before the conversion. These sections are Metadata, Compression, and Advanced Options. In Metadata Section, you can add or modify Artist name, Album Name, Genre, Year of release, etc. From the Compression Section, you can select the Output Audio Format along with Quality/Bitrate of the audio. Through Advanced Options section, you can change Algorithm Quality, manage Bitrate (by defining maximum and minimum bitrate for the output audio), and modify Channel Mode and Sampling Rate.

After audio modifications and selecting the output format (WAV), you can press the Encode Now button from the Source File section to initiate conversion process. 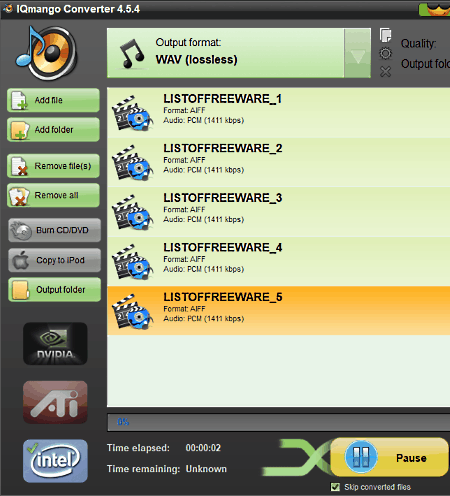 IQMango Audio Converter is yet another free AIFF to WAV converter software for Windows. It is mainly an audio converter, but it can also convert videos due to various supported input and output video formats like MP4, AVI, WMV, etc. In it, you can optimize both the output audio and video formats according to portable devices like Apple Devices, Mobile Phones, Portable Players, Gaming Consoles, etc. Plus, its ability to convert multiple audio files simultaneously is also impressive. Some of the supported input and output audio formats of this freeware are FLAC, WAV, MP3, OGG, WMA, AMR, AC3, etc.

Now to convert AIFF to WAV, you need to add a one or more AIFF files using Add File or Add Folder options respectively. After that, select the output format to WAV from Output Format > Popular Audio section and vary audio quality using quality slider. Lastly, press the Start Button to convert all input AIFF files into WAV. 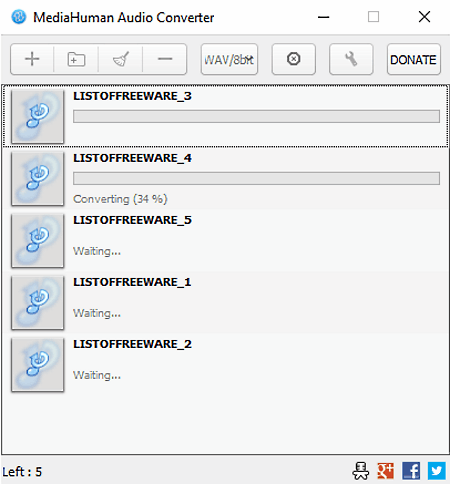 MediaHuman Audio Converter is a lightweight audio converter software which can also be used to as an AIFF to WAV converter. In this software, you can perform batch audio conversion between various audio formats like AAC, AC3, AIFF, ALAC, FLAC, M4R, OGG, MP3, and more. Plus, it also lets you convert AIFF to different variations of WAV file like WAV/ A-law, WAV/ mu-law, WAV/ 8-bit, WAV/ 32-bit, etc. The speed of audio conversion is also quite fast as it uses parallel conversion in case of multiple input audio files. However, you also get the option to limit the number of CPU cores used during the conversion, to leave some space to perform other activities during the conversion.

In order to convert AIFF to WAV, first, select one of WAV format variants from the output format menu. After that, drop single or multiple AIFF files to its interface and press the Convert Icon to start the conversion.

There are few additional features that this software contains are Schedule Tasks (do nothing or exit program), Limit number of used processors used during the conversion, set the path of output file folder, vary notification settings, etc. 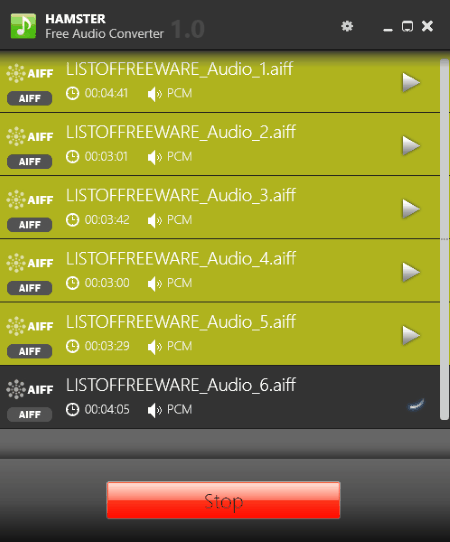 How to convert AIFF to WAV:

Apart from normal format conversion, you can also merge up to 3 audio files into one single file just before the conversion. 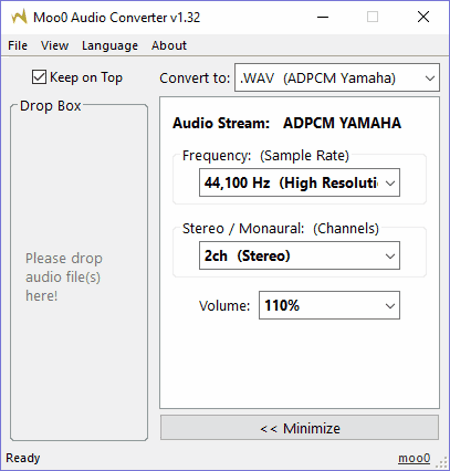 Moo0 Audio Converter is a straightforward AIFF to WAV converter software for Windows. In it, you can easily convert AIFF audio to WAV format, by dropping the AIFF file to its interface, just after selecting the WAV from Convert to menu. Multiple AIFF files can also be dropped on its interface to perform the batch audio conversion. By default, it keeps all audio parameters intact during the conversion. However, you can manually vary some audio parameters named as Frequency (between 8000 to 44000 Hz), Channels (Stereo and Mono), and Volume (between 10 % to 300%). There is one interesting feature about this software that it provides an option to choose the same output format in both lossy and lossless compression.

This music converter can also be used to perform audio conversion between various audio formats such as AAC, MP3, MP2, OGG, RAW, M4A, and more. 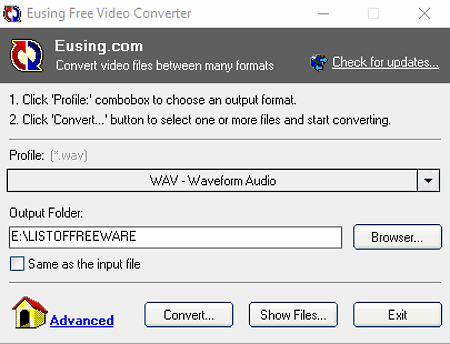 Eusing Free Video Converter is a free video converter software for Windows. This can also be used as an AIFF to WAV converter as it supports audio conversion too. It is an FFMPEG based Video/Audio converter software and has a very basic interface. On its interface, you can view only two menus namely Profile and Output Folder. From its Profile Menu, you can select general audio formats including AC3, MP4, MP3, OGG, WAV, and WMA.

How to convert AIFF to WAV in two simple steps:

Its Profile menu also has a Manual Conversion option using which, you can manually modify various audio parameters such as Audio Bitrate, Audio Sample Rate, Audio Channels, etc. This manual conversion method is mainly used to perform video conversion. So, I will not recommend this method to perform audio conversions like AIFF to WAV. 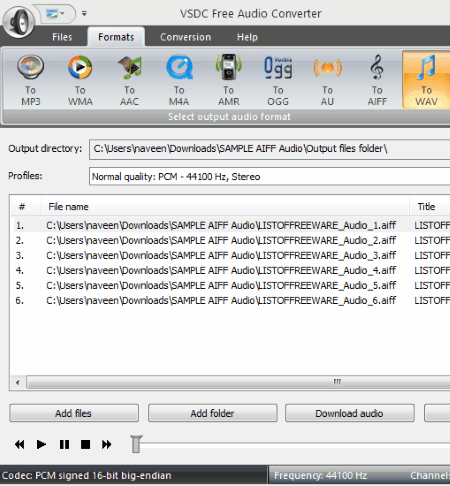 VSDC Free Audio Converter is a free and feature-rich AIFF to WAV converter for Windows. In this converter, you can convert single as well as multiple AIFF files to WAV format. Before conversion, you can modify various audio parameters such as Quality (Low, High, Medium), Audio Codec (PCM, a-law, u-law, etc.), Frequency, Channels, etc. from Edit profiles menu. On the main interface, you get all the supported output formats like MP3, AAC, M4A, AMR, etc. including WAV format.

To perform conversion, first, add audio files and then modify audio parameters if necessary. After that, just select WAV format from the main interface and press Convert Files Button to start the conversion.

Along with performing audio format conversion, this software can also be used to as an Audio Player, Online Audio Downloader, and as an Audio Tag Editor. 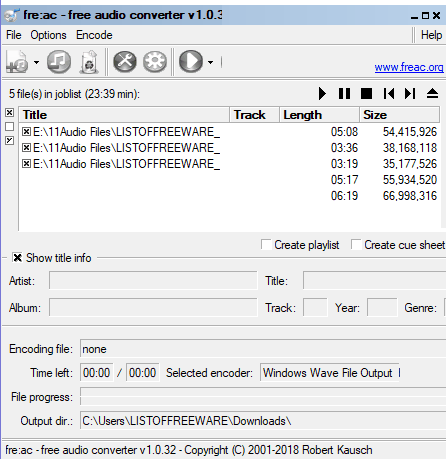 Now, to perform AIFF to WAV conversion, add AIFF files and then go to Configure general settings menu and select Windows WAVE File Output. Now, come to the main interface and click on Start Icon to initiate the conversion.

Apart from audio conversion, you can also create a playlist of added songs, merge multiple songs into one single audio file, Create CUE Sheet, etc. with this software. 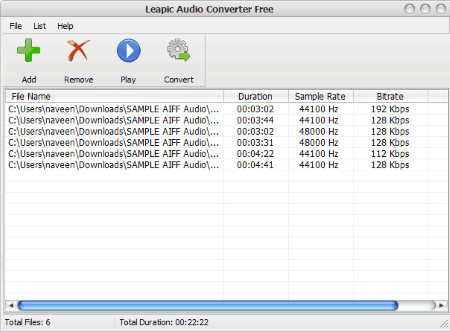 Leapic Media Converter is another powerful AIFF to WAV converter software for Windows. Using this software, you can also convert audio of many formats such as AIFF to MP3, MP3 to WAV, WAV to AAC, and more. As input, it supports most of the audio formats, but as output, it supports only 10 audio formats namely AIFF, AC3, AAC, FLAC, MP2, M4A, MP3, OGG, WAV, and WMA. Through it, you can also batch convert multiple audio files in a parallel manner. Its parallel conversion process processes 2 files at a time.

In this software, it is really easy to convert AIFF to WAV. First, drop AIFF files to its interface and press the Convert button to open Output Settings Menu. From here, select WAV format as output, choose one of the available Audio Quality (High, Normal, Low), and select the destination folder. After that, just press the OK to start the conversion. There is also an inbuilt audio player in which, you can play the songs before or after conversion. Overall, it is a cleanly designed audio converter with audio playback capability. 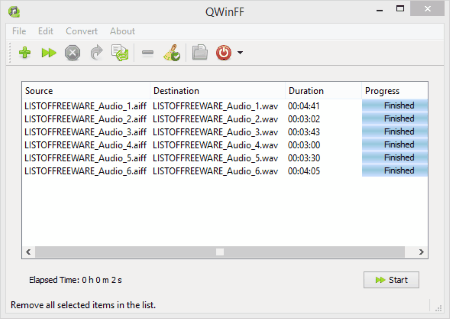 After launching it, you can easily browse and add files that you want to convert. To do so, click on + button or go through File (menu) > Add Files (option). Now, it lets you set desired output format (AC3, AIFF, ASF, AU, AVI, DV, FLAC, FLV, MOV, MP2, MP3, MP4, OGG, RM, SWF, WAV, WMA, etc.). In this case, select the WAV file format. After specifying the output format, you can customize audio parameters such as quality, sample rate, bit rate, channels, volume level, etc. Lastly, click on the Start Button to begin the conversion.