Here is a list of best free animated PNG editor software for Windows. Using these free software, you can edit APNG files. APNG stands for Animated Portable Network Graphics format which is used to store animation representing moving frames. It is similar to an animated GIF.

These APNG editors provide a lot of standard editing features which you can use to modify Animated PNG. These features include rotate, resize, flip, mirror, color profile adjustments, filters, effects, watermarking, and more. You also get painting tools in a few of these Animated PNG editors, such as pen, pencil, paint, shapes, line, text, etc. Using these tools, you can add annotations over frames of an APNG file. In most of these software, you get to edit individual frames of an APNG file. So, you can delete selected frames, add new frames, import images as frames, reorder frames accordingly, and/or change frame duration.

Many of these software are featured image editor software. So, you can also edit static images in various formats using them, such as BMP, JPEG, ICO, TIFF, etc. One of these is a video editing software using which you can edit videos of a few selected formats. All in all, these software are packed with some interesting and unique features. You can go through this list to know more about these freeware.

If you use Paint.NET, you can edit APNG file in it but by using a plugin. You can checkout the full article to know more. 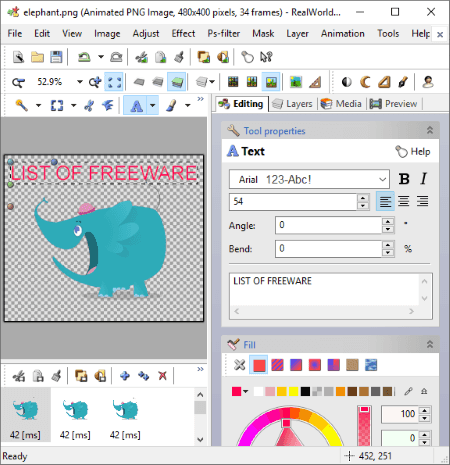 RealWorld Paint is one of the best free animated PNG editor software on this list. It provides a great set of modification tools to import and edit APNG in it. You get standard image editing tools as well as drawing tools to add annotations to an animated PNG file. Let us discuss its editing features in detail.

How to edit APNG in RealWorld Paint:

It is the best free software on this list to edit animated PNG. It possibly provides all tools which are required to customize APNG or any other graphics. Plus, it has a clean GUI so that you can easily work with it. 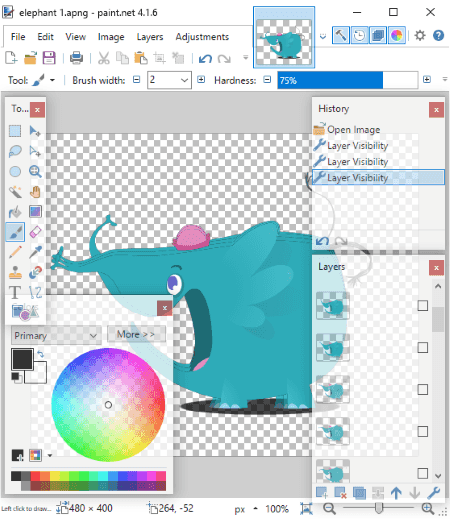 Paint.NET is another free alternative to an APNG editor software for Windows. It is a popular image editor which can also be used to edit animations in GIF and APNG formats. But, to do that, you need to use an additional plugin. Let’s see how you can install this plugin with Paint.NET to edit APNG.

How to edit APNG in Paint.NET using plugin:

You need to use a plugin to be able to edit animated PNG file in it. In order to install the required plugin, follow below steps:

When you import an APNG file in it, all frames are shown in the Layers window. You can modify individual frame/ layer using various editing and drawing tools. When done with editing, you can use its save as feature to save APNG file. Also, while saving APNG, you can customize its frame rate and loop count.

If you are a regular user of Paint.NET, it is a convenient option to edit APNG file. It also supports a variety of plugins which can be used to enhance its functionality. 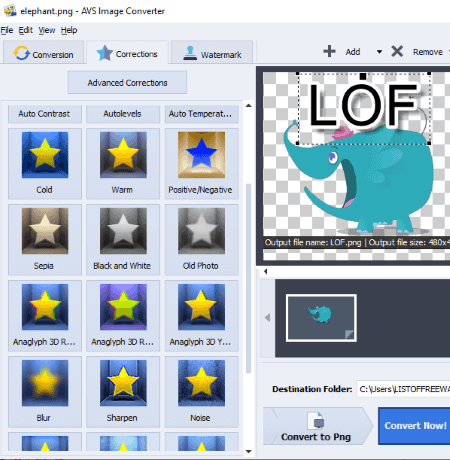 AVS Image Converter, as the name suggests, is a free batch image converter for Windows. This software can also be used as an Animated PNG editor as it lets you open, edit, and convert APNG files. In it, you cannot edit individual APNG frames but APNG file as a whole.

For editing APNG in it, you just need to import APNG files to it, customize them using available tools, and then export them. Let’s see what are the tools provided in it:

It is a nice free image converter which also lets you edit and convert APNG files. 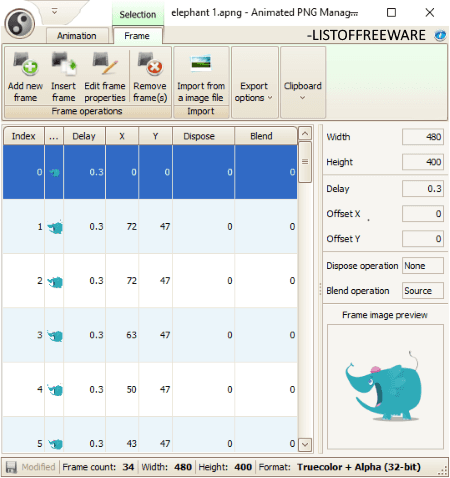 Animated PNG Manager is yet another APNG editor software for Windows. It is basically an animated PNG manager using which you can view, edit, and manage APNG frames.

It is a decent software to view, edit, create, and manage APNG files.

Note: This software only supports animated PNG with .apng extension. Hence, if you have an animated PNG file with normal .png extension, then change its file extensions using default rename feature of Windows. 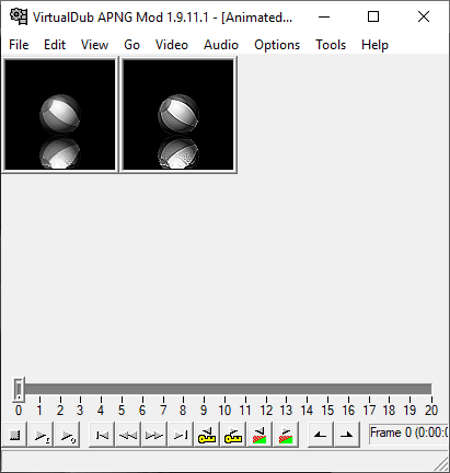 VirtualDub APNG Mod is the next free portable APNG editor for Windows. It is basically a video editing software which also supports animated PNG and GIF files to edit. You get some editing features to modify APNG file. Let’s see what are those features.

How to edit APNG using this free portable software:

In general, it is a good free and portable software to edit APNG files.