After completion of tests, you can view various resultant values like Effective bandwidth of LAN, Average LAN speed, Maximum LAN speed, Time to send the packets, etc. In some software, you will also be able to save speed test result as TXT, CSV, PSD, etc. files.

LAN Speed Test is my favorite software because it can perform both quick and exhaustive LAN speed test. It lets you manually set the size of data packets between 2KB (for quick testing) to 9GB (for exhausting testing). Plus, the final result provided by it is also very detailed that you can also save as PDF. 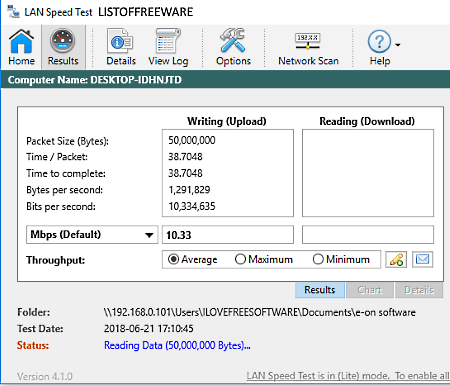 LAN Speed Test is a free LAN speed test software for Windows. Using this software, you can easily test speed of your Local Area Network (wired and wireless), Hard Drive, and Portable Storage Devices. In order to test LAN speed, it sends packets of data between two computers of the same network and then determines the Average, Maximum, and Minimum speed of the network.

How to test speed of LAN using this LAN speed test software:

After the test, you can view average, maximum, and minimum LAN speeds along with time/packet, time to complete, bytes per second, chart of read and write speed, etc. The obtained result can be saved as PDF or it can be directly printed using the Print button.

Note: In this free version of this software, various advanced features are locked including its LAN speed test server. Hence, you need to purchase its paid version to unlock all its features. 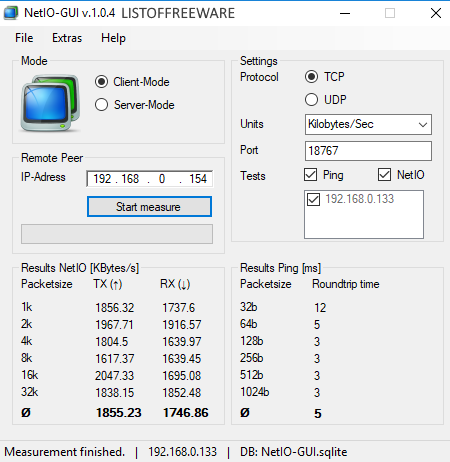 NetIO-GUI is a free, portable, and open source LAN speed test software For Windows. Using this software, you can test speed of your local area network and Ping Roundtrip time using either TCP or UDP protocol. To test LAN speed, this software sends and receives multiple data packets of different sizes between two computers of the same network. Once the speed test gets completed, it shows you packet transfer and packet receive speeds. Plus, Ping Round Trip time is also shown by it on the main interface.

In order to test LAN speed, you need have one server computer and one client computer on a network. To do that, you need to first install this software on both computers which are connected through same LAN. After that, select the Server Mode in one system and press the Start Server button to make it a server. In the other system, select Client mode and provide the IP address of server computer in the IP Address Field. At this time, you can also select a Protocol (TCP or UDP) before starting the LAN speed test. After setting up all the configurations, just press the Start Measure button to start the testing. You get both the Ping Roundtrip time along with Packet receive and send speed over the LAN network in the real time. You can save the obtained result as Excel/CSV and as a Text file. By default, this software provides LAN speed result in Kb/sec, but you easily can change it to b/sec, Mb/sec, or Gb/sec. Overall, it is another simple software to test LAN speed. 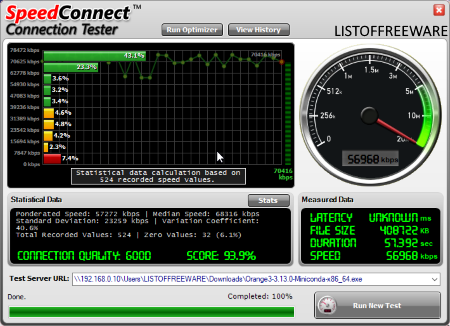 SpeedConnect Connection Tester is the next free LAN speed test software for Windows. This software allows you to quickly test both the Internet and LAN speed. Plus, the process of testing the LAN and internet speed is also quite similar. In case of Internet speed test, you need to provide URL of a test server after which you can start the internet speed test. Similar to this, for LAN speed test, you also need to provide the path of the test server but instead of an online server, you need to provide the path of a local network system. The path of local server consists of IP address of the server computer along with the path of a file or folder contained in the shared folder. The path would look similar to this: \\192.168.11.123\LISTOFFREEWARE\testfile.zip. After entering the path, press the Run New Test Button to start LAN speed test. After the test, you can view LAN speed in kbps, Duration of the test, File Size, Latency, LAN Quality, etc. from its interface.

In it, you also get two more handy features namely Internet Accelerator (to speed up the downloading and overall internet speed) and Network Monitor (a small on-screen internet monitor to show the real-time upload and download speeds).

Note: Some features of this free software is locked. By purchasing its paid version, you can use all of its features. 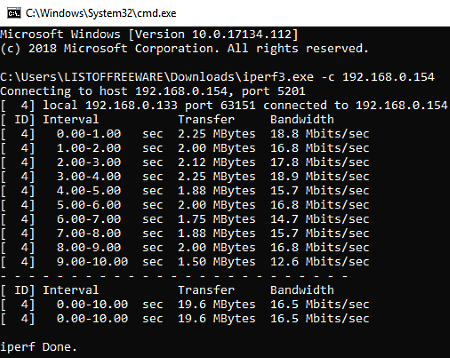 iPerf is a free and portable command line based LAN speed test software for Windows. Using it, you can measure maximum achievable bandwidth over a LAN or IP network. Plus, it also allows you to tune various parameters related to Timing, Buffers, and Protocols (TCP, UDP, SCTP, etc.). In order to perform parameters tuning or LAN speed testing, you need to know various commands as it does not have any interface. To view all supported commands, launch this software in Command Prompt and enter iperf.exe and press Enter.

After completion of the test, you can view time interval to test LAN speed, total number of transferred data to test speed, and average bandwidth or LAN speed over the command line. Apart from LAN speed test, you can also use this software to test disk read and write speeds. 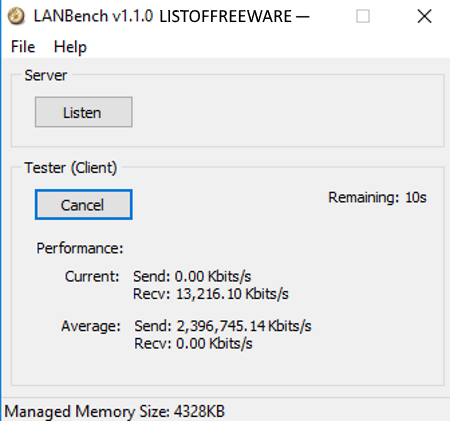 LANBench is yet another free and portable LAN speed test software for Windows. It is a LAN/TCP based network benchmark utility through which you can test network performance between two computers.

In order to test LAN speed, you need to have this software in at least two computers of the same local area network. In one computer, this software acts as client and in other, it acts as server. To create server, launch this software in one computer and press the Listen Button to start the server. After that, go to the client computer and enter the IP address of the server computer and set Test parameters named as Packet Size, Number of Connections, and Test Duration by going to File > Configuration menu. Lastly, press the Test button on the client computer to start the testing. On its interface, you can view the real-time send and received data speeds in Kbits/sec. Once test gets completed, you get Average Send and Receive speeds over the LAN network.

Overall, it is a very simple LAN speed test software which is also very light on the system resources. 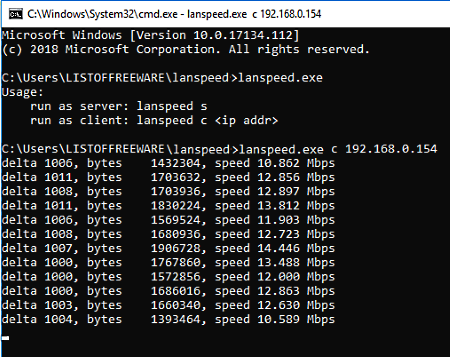 lanspeed is one more free, portable, and open source LAN speed test software for Windows. It is another command line based software and requires commands to perform LAN speed testing. Similar to some other LAN speed testers, it also needs to be present in both computers which are going to be used to test LAN speed.

To test LAN speed, first, launch this software using command prompt in both test computers. After that, enter lanspeed s command in one computer to make it a server. Similar to this, enter lanspeed c <ipaddress of the server system> and press enter to start LAN speed testing. Once test process gets started, you can view the Packet size, Delta Value, and LAN speed on the command prompt. The test process keeps going on, hence you need to manually kill the speed test process using Ctrl + C command.

The speed test result provided by this software cannot be saved or exported, but you can still directly copy the result from the Command line. In general, it is another simple command line based software to test LAN speed.