Here is a list of best free lightweight Android emulator software for Windows. These lightweight Android emulators consume minimum amount of system resources to run the Android OS on a PC. Some of these emulators are also quite lightweight in terms of their setup sizes. Similar to any Android phone, you can easily download and run Android apps in these emulators. To interact with their interface, you can use your Mouse and Keyboards. Plus, some of these also support gamepads to run games. These emulators also add some quickly accessible features on the main interface like Screen Rotator, Resolution Changer, Screenshot, APK Installer, etc.

All of these run Android OS, but most of these run different versions of Android like Android 4.0.4, Android 5.1, Android 6.0.1, etc. According to the version of Android, you get different interface and features. Plus, in some software, you can find the Play Store app. Still, each of these lets you install and run APKs from external sources. With emulators based on older versions of Android, you can face the compatibility problem with the latest apps and games. Despite some drawbacks, all of these run Android OS smoothly without stressing the system too much.

Youwave is my favorite because it is quite a light emulator both in terms of its size and impact on system resources. Plus, its responsive nature and smooth transition between apps make it my favorite lightweight Android emulator.

The latest Android version supported among these software is Android 6.0.1. If you want to run this version, then you can go for KOPLAYER.

You can also check out lists of best free Android Emulator, iOS Emulator, and Android Desktop Manager software for Windows. 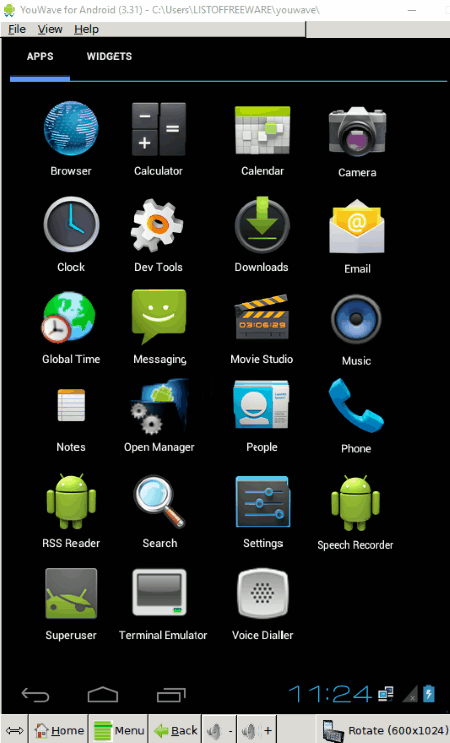 Youwave is a free and lightweight Android emulator software for Windows. This emulator comes in a small sized setup of 143 MB which is based on Android 4.0.4 Ice Cream Sandwich. The overall system usage of this emulator is also very low that give you a headroom to run other applications. Its interface is exactly same as stock Android 4.0.4 version where you get multiple Widgets, Apps, an App Drawer, and other standard Android features. To interact with its interface, you can use your mouse. Plus, at the time of gaming, you can also use the keyboard with it.

To make the usage of this emulator more interactive, some additional features are added on its top and bottom toolbars. Some of the features added by this software are Resolution Changer, Screen Rotate, Icon Redraw (to change the appearance of icons), Desktop Notification, Volume Controller, and more.

In general, it is another good and lightweight Android emulator. However, it also has some drawbacks like lack of Play Store app, older version of Android, lack of support for various newer apps and games, etc. To compensate for the lack of Play Store, it lets you download and install external APKs. 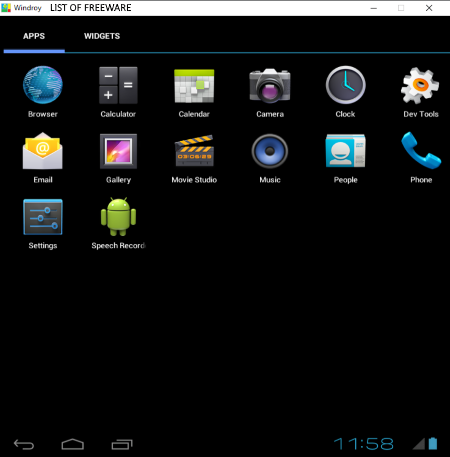 This software is based on Android 4.0 Ice Cream Sandwich version which is quite well known. However, it is also quite outdated and many latest apps and games do not support it. It also does not come with Play Store, hence you need to download APKs from external sources. Still, if you need a lightweight Android emulator which can run in any Windows system, then it is an ideal software for you. 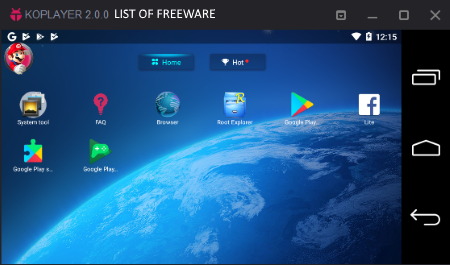 KOPLAYER is one more free and lightweight Android emulator software for Windows. Using this emulator, you can run the Android OS on your Windows system. Just like any Android phone, you can easily install apps, and games directly from the Play Store after signing in on your Google Account. With the use of your mouse, you can easily interact with its interface. Besides Android interface, an additional side toolbar is provided by it that contains some handy features like Rotate Screen, Screenshot, Shared Folder, Install APK’s (to install external APK files), etc.

This software is not light if you consider its setup size, but it consumes much fewer resources when compared to standard Android emulators. The requirement of less resource allows it to run smoother even in low-end computers.

The main advantage of this emulator is that it is based on Android 6.0.1 Marshmallow which is a quite newer version of Android when compared to other emulators. Plus, it supports 99% of available apps on the Play Store which makes it ideal to run newer apps. Some other features of this software are Multiple Account Support, OpenGL & Hardware Acceleration Support, Video Recording, and Gamepad & Keyboard Support. 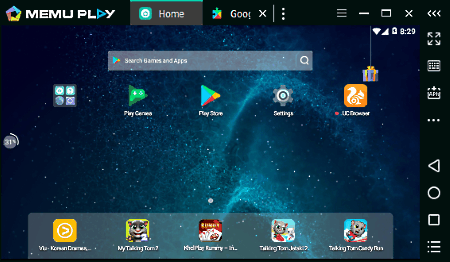 MEmu is yet another free and lightweight Android emulator for Windows. Using this software, you can easily emulate Android operating system in your system. This emulator does not stress the system too much and hence, works smoothly even when playing games in it. However, it does have some minimum system requirements that your system must meet to run this emulator perfectly. Minimum requirements to run this software are: 1GB of RAM, Windows 7 and above, GPU with OpenGL 2.0 support, and Intel or AMD processor with virtualization technology.

This emulator is based on Android 5.1.1 Lollipop version and allows you to install apps from both Play Store and external sources. Most of the apps available on the Play Store can easily be run in this emulator. Most part of its interface is similar to standard Android, but some tweakings namely Windows Style Tabs and Toolbar are added by this emulator. In its Toolbar, you can find some advanced and useful features like Multiple Instance Manager, Keymapper, Volume Controller, GPS Simulator, etc. Overall, it is another good and lightweight Android simulator for Windows. 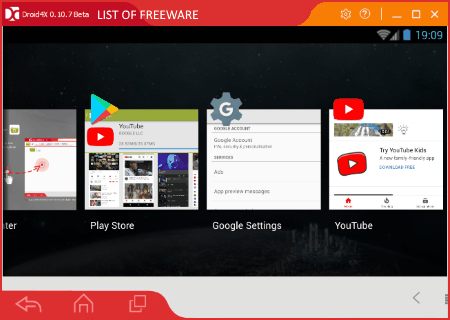 Droid4X is the next free lightweight Android emulator software for Windows. This emulator runs on a heavily customized version of Android 4.4.2 OS. Due to customized Android, it comes with a quite different interface than standard Android. Still, it does not consume too much system resources and give you a headroom to run other programs with it simultaneously. Along with its customized interface, you also get an added toolbar at the bottom. In its added toolbar, you get some handy features like Joystick Simulation, Screenshot, GPS Simulation, Keys Simulation, etc.

When you install this emulator, you only get a Play Store app with it. Using the Play Store app, you can install any game or app you want. All added apps will be seen on the Desktop section of its interface. However, some of the latest games and apps may not support this emulator as it is based on Android 4.4.2 KitKat. To interact with its interface, you can use mouse and keyboard. Plus, in case of games, it also allows you to add gamepad with this emulator.