Here is a list of Best Free M3U Player Software For Windows. These are the audio players which support playlist formats including M3U, such as PLS, ASX, XSPF, WAX, WVX, etc. You can add and listen to M3U playlists without much hassle. Not just that, most of these even let you create M3U playlists or any other supported playlist with desired soundtracks. These let you shuffle your playlists, add or remove tracks, sort your playlist, and save the edited version of your playlist.

Additionally, you can view total duration of playlist, each song’s information, and filter songs based on genre, title, etc. Each M3U player has distinct features. For example, some of these provide equalizer, speed control, audio visualization, etc.

Although all of these are pretty good at playing M3U playlists, my favorite M3U player is VLC Media Player as it supports a good number of playlist formats. iTunes is also good as it acts as a playlist manager too. I like GOM Audio too because it provides some desirable features like synchronized lyrics, speed control, nice GUI, etc.

You may also like some best free Music Manager Software, Internet Radio Player, and Music Visualizer Software for Windows. 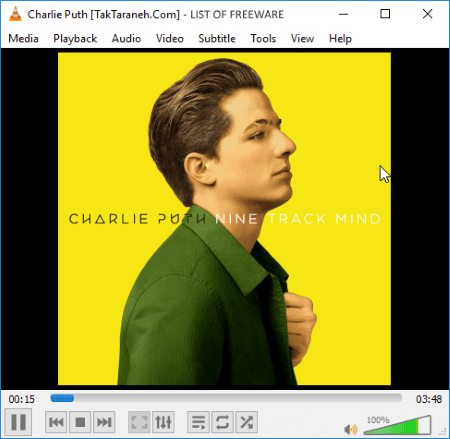 VLC Media Player is a popular audio and video player for Windows. It also acts as an M3U playlist player. It actually supports most number of playlist formats. You can import ASX, B4S, CUE, M3U8, PLS, RAM, RAR, SDP, XSPF, WAX, WVX, ZIP, and CONF playlists to this media player. After importing a playlist, you can view it by going to View > Playlist. You can import multiple playlists using Advanced Open option. It lets you sort the playlists, change playlist view mode (detailed, icon, list, pictureflow), shuffle songs, add or remove songs, etc. You can create a new playlist or save edited one as XSPF, HTML, M3U, or M3U8 playlist.

VLC Media Player can be used for many other utilities. These include editing video metadata, boost sound, rotating videos, etc. 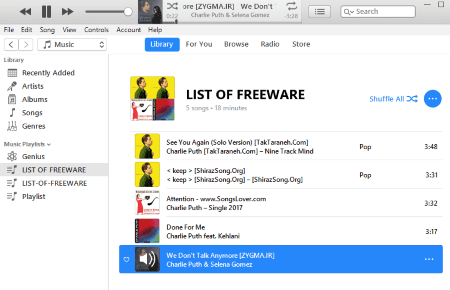 iTunes is a popular software to listen to your favorite music and manage your music library. It also lets you listen to existing playlist files such as M3U, PLS, XSPF, etc.

Features of this M3U Player: 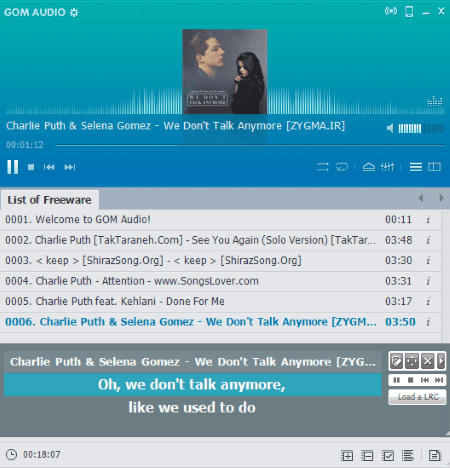 GOM Audio is one of the best audio players for Windows. Apart from general audio formats, it also supports M3U playlists. You can directly import M3U playlists to the software and listen to them. It lets you add multiple M3U playlists. It lets you sort playlist songs by artists, shuffle playlists, align with title, track number, etc. It displays all songs with respective information, and it also shows total playlist duration. Not just import, you can also create M3U playlists in it. Simply add tracks to create a new one or edit an existing playlist by adding, removing, and reordering tracks.

As an audio player, it is an advanced one. You get synchronized lyrics, audio equalizer, speed control, audio visualizer, etc. desirable features. 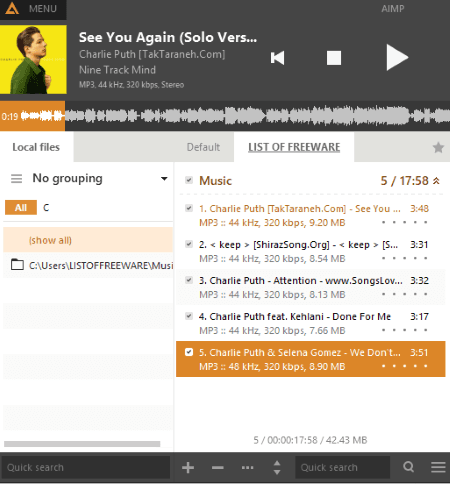 AIMP is a nice free music player which can be used as an M3U playlist player. Other than M3U, it was able to play XSPF and PLS playlists too. You add songs to current playlist, remove a track from it, play it in repeat or shuffle mode, etc. The edited playlists or a new playlist can be saved as M3U, AIMP, or Winamp playlist.

Apart from being a music player, it can also be used for editing music metadata tags and converting audio formats. 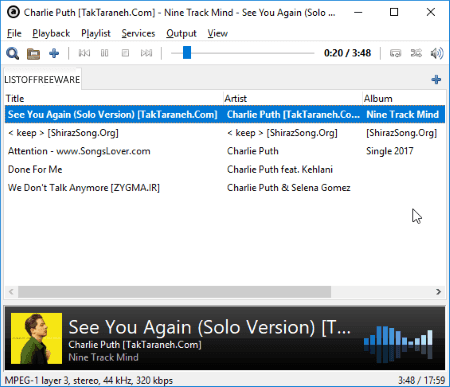 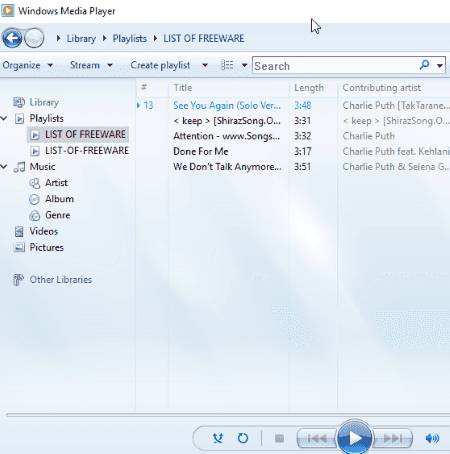 Windows Media Player is a default music and video player for Windows. It also lets you listen to a M3U playlist. It automatically displays all M3U playlists present in your music library. You can view and play them from left panel. It lets you reorder your playlist, remove songs from playlist, rate a track, and view audio metadata. 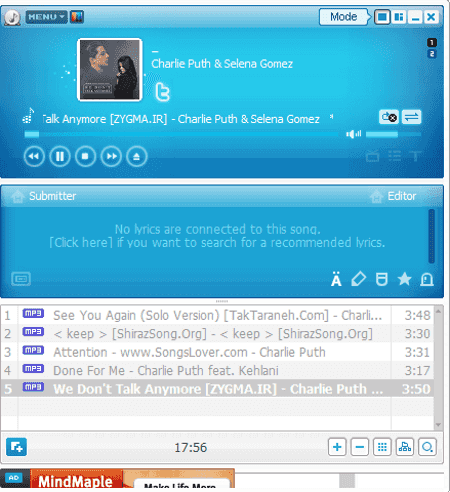 ALSong is another great audio player which can play M3U playlists. Not just M3U, it also supports other playlists formats including PLS and ASL. It shows the playlist duration, song information, synchronized lyrics, etc. on its interface. You can shuffle songs, sort them, add more songs to the playlist, remove a song, and do more. After making changes, you can save the playlist in any of supported formats. Or, you can simply create a new playlist. 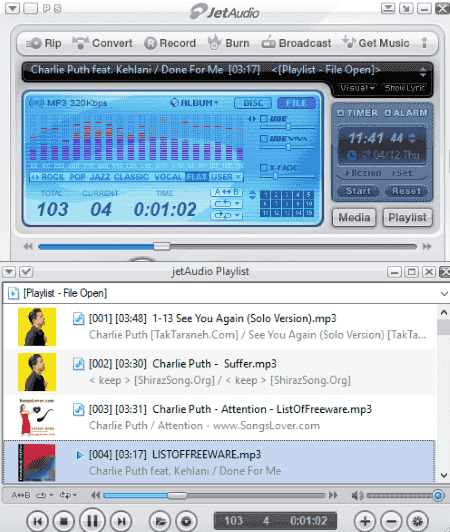 jetAudio is another feature rich music player with playlist support. It can play M3U, M3U8, PLS, ASX, WAX, and WVX playlists. Apart from simply listening to your playlists, you can sort containing songs, view song metadata information, reorder songs, print the playlist, etc. It also lets you merge multiple playlists or songs into one playlist file. The formats supported to export a playlist include M3U and PLS. 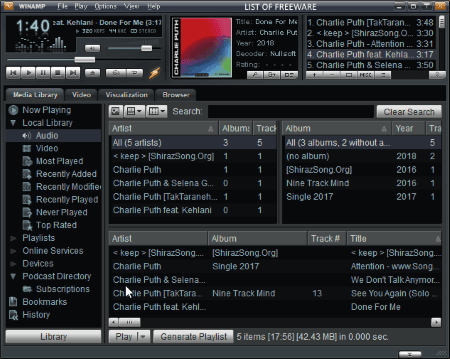 Winamp is a popular music player software for Windows. This can be your another alternative to an M3U playlist player or PLS, XSPF, ASX, etc. playlist player. You can import your playlists and listen to your favorite tracks without much hassle. It provides a dedicated playlist manager which lets you add multiple playlists and listen to them one by one. If you want to make changes to opened playlist, you can add or remove songs, shuffle the playlist, sort songs by title, filename, etc., randomize playlist, reverse playlist, etc. You can create afresh playlist or save imported playlist in M3U, M3U8, or PLS format. 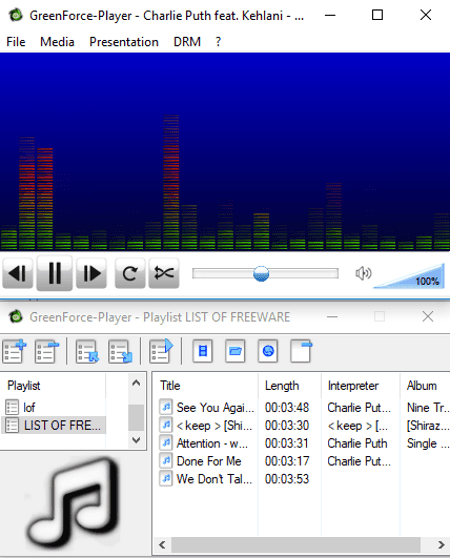 GreenForce-Player is a simple M3U playlist player for Windows. Not just listening to an already existing playlist, you can create your own playlists too. You can manage your playlists by adding new tracks, removing tracks, etc. And lastly, you can export created or edited playlist in M3U format.

It is a basic yet nice music player plus video player. It provides features like audio visualization, password protect video, etc. 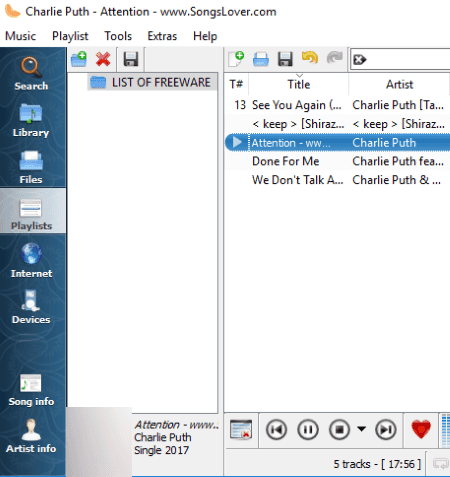 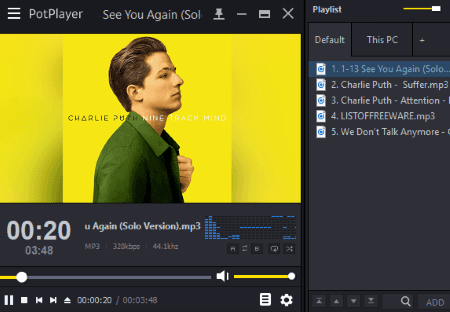 PotPlayer is a media player which plays both audio and video files. It can also play playlists of different formats including M3U, such as PLS, XSPF, ASX, etc. You can also edit M3U playlists. It provides options like add new tracks, remove a track from the playlist, sort the playlist, change playlist view settings, etc. It lets you save a playlist in a format including M3U, ASX, and PLS. 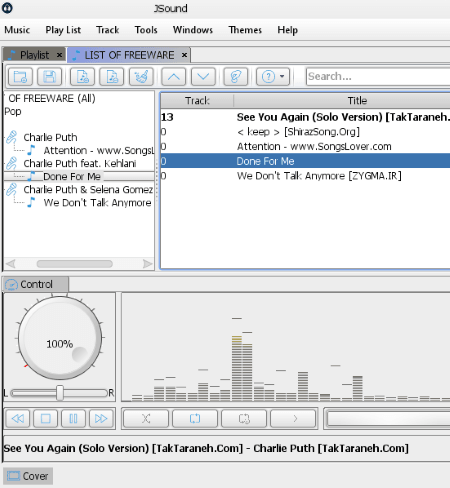 Jsound is one more M3U player for Windows. It provides a dedicated Play List menu using which, you can import M3U playlists. Other than that, it supports two more playlist formats namely XSPF and PLS. You can import multiple playlists in new tabs. It displays songs contained in a playlist with respective information. You can add more songs to current playlist. It provides a Smart Playlist option which lets you view playlist by Genere, Artist, Channel, etc. You can also create a new playlist or save edited playlist in M3U or XSPF format. 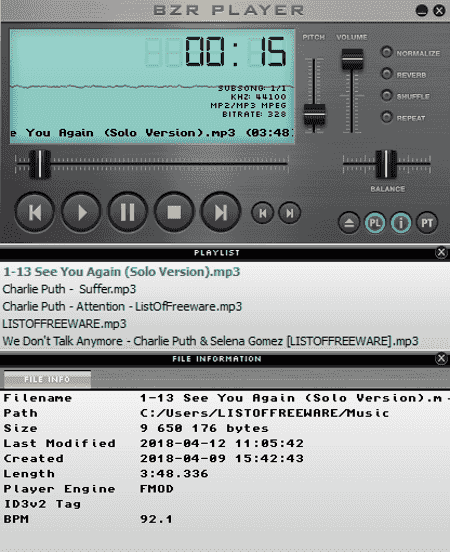 BZR Player is a portable M3U player for Windows. You can listen to M3U playlists or any other playlist (PLS, XSPF, etc.). It provides a Toggle Playlist button which lets you view containing songs, clear playlist, add new tracks, remove selected tracks, and find a song in playlist. You can create a new playlist or save an edited playlist too. For that, it supports only M3U format. 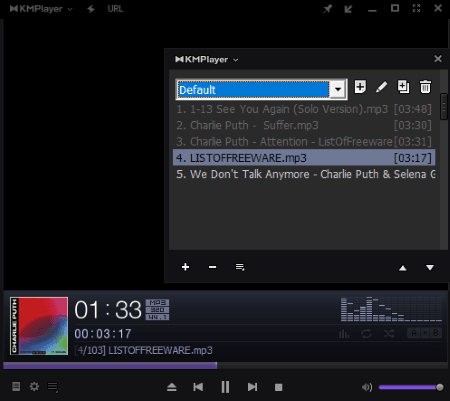 KMPlayer is another one of media player with playlist support. It lets you play M3U playlists and even PLS and ASX playlists. You can also create new playlists in these formats. It lets you edit and manage playlists using options like add tracks, remove tracks, sort tracks, replace tracks, edit playlist entries, view media information, etc.

It is a cross platform media player available for Windows, Mac, Android, and iOS platforms. 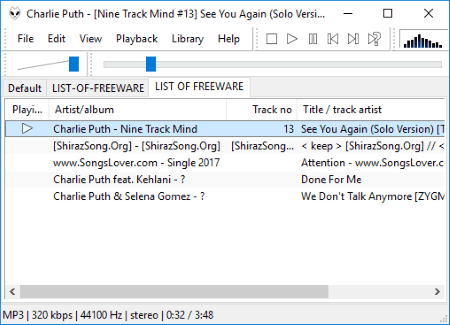 foobar2000 is the next M3U playlist player software for Windows. I am not sure which other playlist formats it supports, but it was able to play PLS playlists too. You can open multiple playlists in different tabs in this audio player. Other than that, a Playlist Manager is also provided in it. Using it, you can view imported playlists with number of song entries. You can create a new playlist in M3U, M3U8, and FPL formats in it. Other options to add or remove tracks, view song information, tag metadata, etc. are available in it. 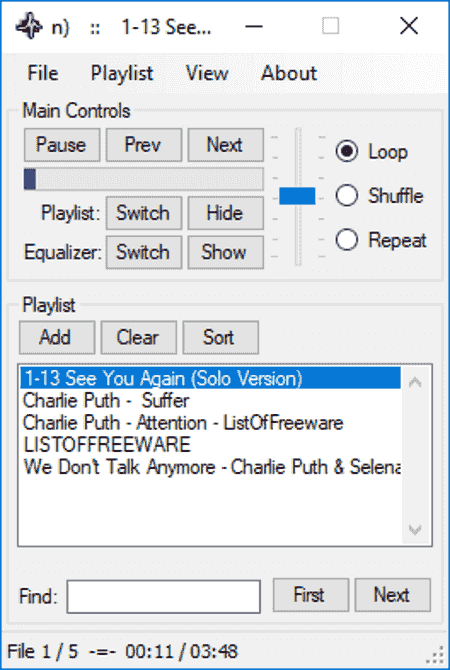 JaMP is a simple music player application with a compact GUI. Along with general audio formats, it supports playback of M3U, PLS, ASX, XSPF, etc. playlists too. You can add multiple playlists to this software. Additionally, you can add, remove, find, and sort soundtracks. You can also create a new M3U playlist in it. It comes with basic playback control such as loop, shuffle, repeat, etc. It offers an Equalizer tool. 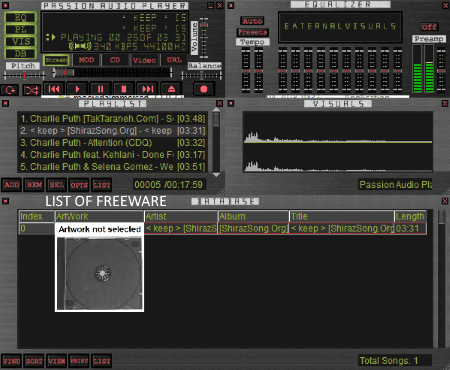 Passion Audio Player is an audio player with playlist support. You can play M3U playlist with standard playback controls. Like other M3U players, this one too lets you add new audio files to the current playlist, remove a particular track, sort the playlist, view song information, and do more.

Apart from playing your playlists, you can create new ones too. For that purpose, it supports M3U, PLS, ASX, WPL, CUE, etc. playlist formats. 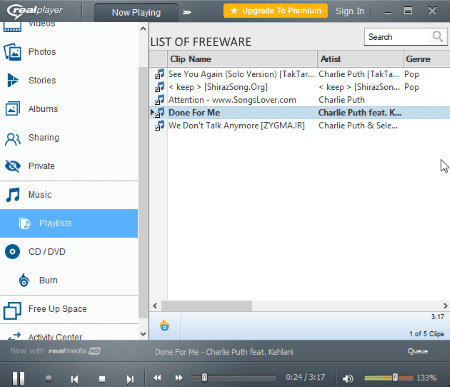 RealPlayer is one more M3U playlist player for Windows in this list. It lets you play PLS, XPL, and RMP playlists too. You can play songs one by one, view album information, add songs to current playlist, etc.

RealPlayer can play both audio and video files. It comes with some additional tools too like Equalizer, Converter, Trimmer, Video Controls, etc. 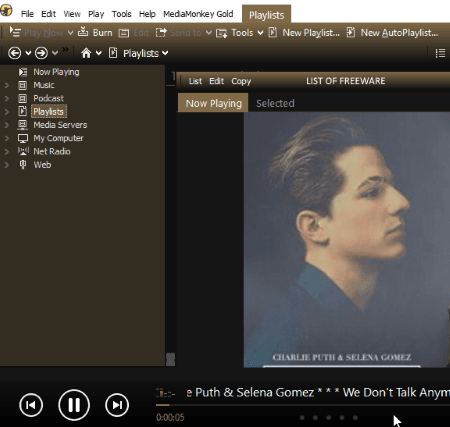 MediaMonkey is an audio and video player software for Windows. It can also be used as an M3U playlist player. It lets you import multiple playlists in multiple tabs. It also lets you view and play favorite, last 50 played, top 50 played, etc. playlists too.

This is a nice media player with features like find missing media information, get song’s artwork online, ID3 tag editor, and more. 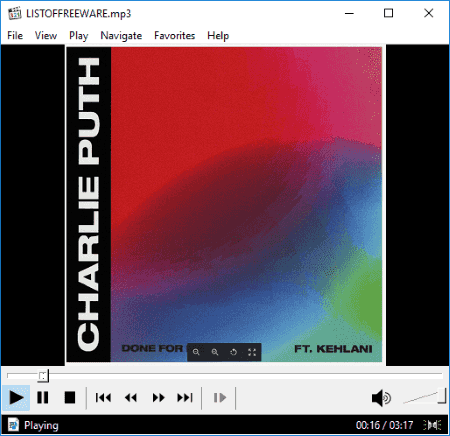 Media Player Classic – Home Cinema is yet another free M3U player for Windows. It lets you play M3U playlists plus playlists of other formats. I’m not sure of what other formats it supports, but PLS playlists worked fine in it. The open playlist can be viewed from View > Playlist option. You can shuffle, randomize, sort, or remove tracks. You can also save a playlist as M3U, ASX, or PLS file. 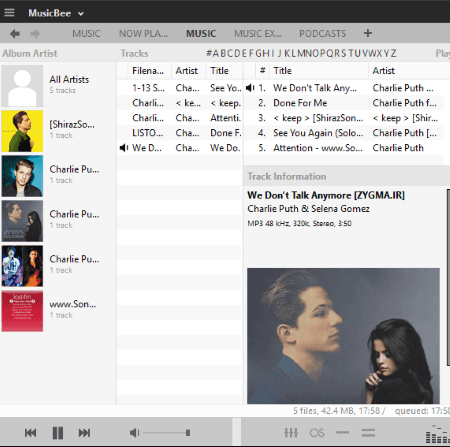 MusicBee is another free software in this list of M3U players. Not just M3U, this software also supports ASX,  PLS, WPL, and XSPF playlists. Its main interface shows containing songs, artist information, and track information. It plays each track with respective lyrics and cover arts.

It is quite an advanced music player. You can listen to podcasts, internet radio, and SoundCloud in it. 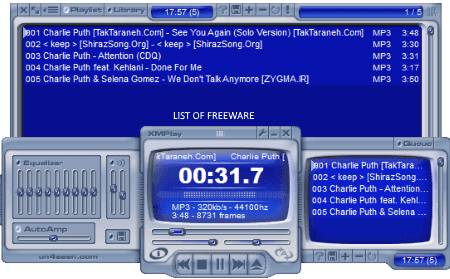 XMPlay is a free, portable M3U player for Windows. Other than M3U, you can also listen to PLS, ASX, CUE, and WAX playlists. You can add multiple playlists to it, add/remove songs to/from a playlist, etc. It displays all playlist tracks with total duration of songs. Also, this one too lets you create a playlist in PLS and M3U format. 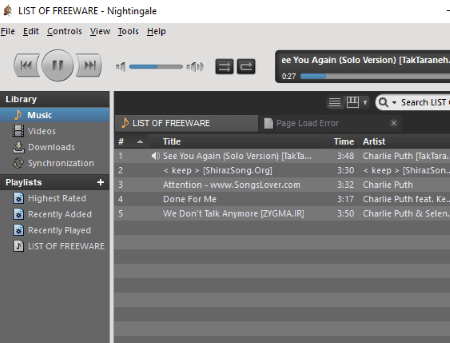 Nightingale is another music player with M3U playlist playing capability. Apart from M3U, it supports quite a good number of playlist formats. These include ASX, PLS, ATOM, RSS, PHP, HTML, etc. playlists. You can add and manage multiple playlists individually. You can also view some standard playlists like Highest Rated, Recently Added, Recently Played, etc.

Along with standard playback controls, you can use tools like Equalizer, Get Artwork, Media Filter Panel, etc. 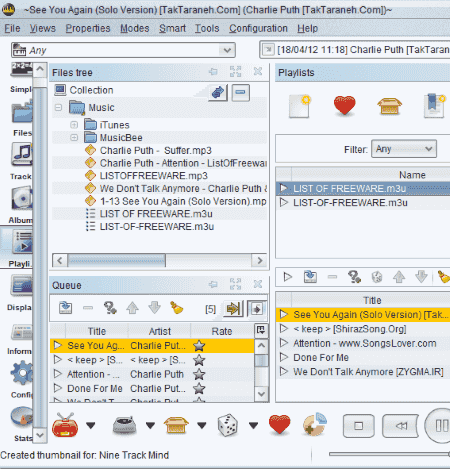 Jajuk is another freeware which can play M3U playlists. From Playlist section at left, using its inbuilt file explorer, you can add your playlists to the software and listen to them. It lets you play a playlist in continue, shuffle, or repeat mode. Basic features like adding or removing soundtracks, shuffling playlist, etc. are available in it. It also displays lyrics and album art of songs.