Here is a list of best free XML to XSD generator software for Windows. Through these software, you can generate an XSD code from an XML file. These software basically format the XML code according to XSD parameters. XSD or XML Schema Definition is a set of rules defined by the World Wide Web Consortium (W3C) to formally describe elements in an XML document. If you want your XML code to follow the W3C rule, then you need to generate XSD from XML code through these generators. In some software, you can also directly enter or paste the XML code to get the respective XSD file or code in return.

In these XML to XSD generators, you can also view and edit XML code before converting it into XSD. However, for editing, you only get basic editing tools like Cut, Copy, Paste, Undo, Redo, etc. In most software, you can also view and edit documents of other formats like DTD, DOCX, CSV, etc. Besides these features, you also get additional tools like XML Validator, Digital Signature, Script Executor, XML File Comparer, etc.

My Favorite XML To XSD Generator Software For Windows:

Exchange XML Editor is my favorite software because it makes XML viewing, editing, and XML to XSD conversion really easy. It also lets you generate DTD, RNG, and RNC schemas from XML file. Plus, the presence of various XML related features and additional tools makes it a very useful software.

You can also check out lists of best free XML To PDF Converter, XML to CSV Converter, and Excel To HTML Converter software for Windows. 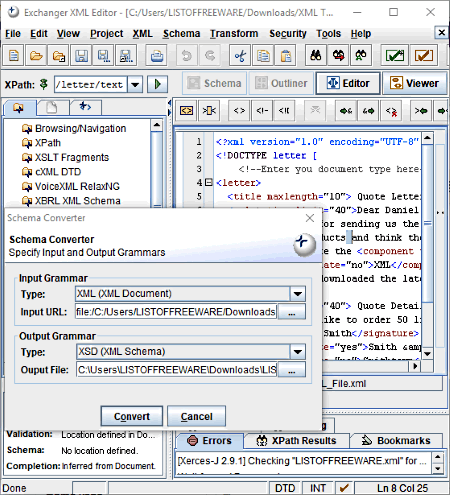 Exchange XML Editor is a free XML to XSD generator software for Windows. It is a feature-rich software which lets you view and edit XML, DB, RNG, SVG, HTML, etc. files. In it, you get a dedicated Viewer mode to protect XML or any other code from accidental changes. For editing, you can use its Editor mode to edit XML code before converting it to XSD code. To perform editing, you get a lot of editing tools like Cut, Copy, Paste, Go to start/end tag, Find, Replace, etc. After making all necessary changes to the XML code, you can convert XML to XSD.

How to generate XSD from XML using Exchange XML Editor:

Besides XSD, you can also generate DTD, RNG, and RNC from XML. In this software, you can find more XML related features like XML Validation, Canonicalize XML Document, Infer XML Schema, XML Diff and Merge, etc. Plus, you can also use this software to digitally sign documents, to verify digital signatures, to execute a script, to execute XSLT transformation, etc. Overall, it is one of the most feature-packed  XML to XSD generator software. 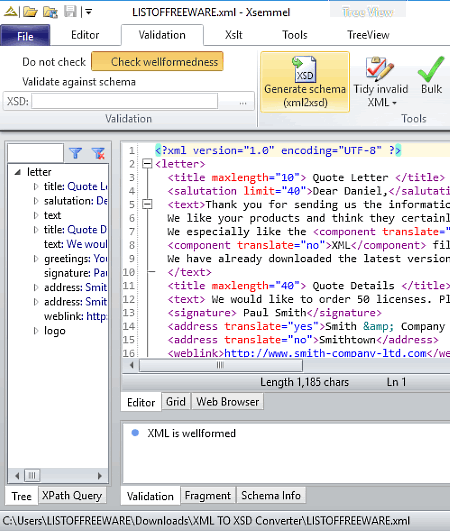 XSemmel is a free and open source XML to XSD generator software for Windows. This software can also be used as an XML viewer and editor software. Plus, you can also use it to validate XML document against XSD schema. Through this software, you can easily generate the W3C approved XSD file from XML code or file.

How to generate XSD from XML using XSemmel:

The output XSD file can also be viewed and edited in this software just like the XML file. Plus, you can find more useful tools like Bulk Validation (to validate multiple XML and XSD files), Compare XML files (to compare XML files with one another), XQuery (to execute XQuery code), Tree View (to view any XML or XSD code in tree like view), and more. 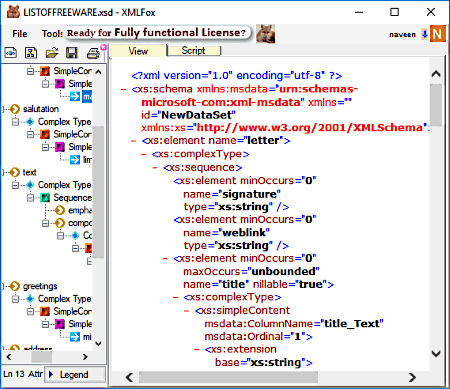 XMLFox is another free XML to XSD generator software for Windows. Through this software, you can easily generate XSD (XML Schema Definition) file from an XML file. Besides XSD generation, you can also use this as XML and XSD Viewer software. In it, you can view XML code in Standard XML view, Script View, Tree View, and Grid View. Plus, the schema of code is also available on the left part of interface from where you can view the structure of XML code.

The separate XSD window is exactly similar to XML window, but you will only be able to view the XSD code in Standard and Script view unlike XML window which provides various code viewing modes. Apart from just viewing XML/XSD code, you can also make changes to both XML and XSD codes by using their respective Script View modes. Plus, all standard code editing tools like Cut, Copy, Paste, etc. are also available in it. In general, it is a simple yet effective XSD generator software. 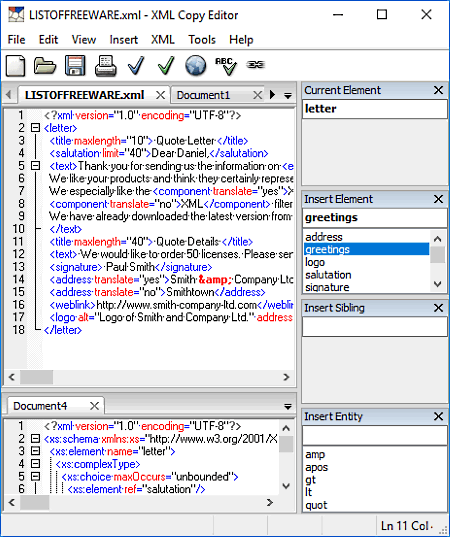 XML Copy Editor is yet another free open source XML to XSD generator software for Windows. It is a well-designed software that looks and feels more like a text editor software. In it, you can open and edit multiple XML files at a time because of its multi-tab interface. The generation of XSD file from XML is equally easy as viewing and editing XML files.

Let’s take a look at steps to generate XSD from XML:

Besides XML to XSD conversion, it also supports files based on XHTML, XSL, RELAX NG grammar, etc. Plus, a lot of handy tools like Validation, Check Well-Formedness, Word Counter, Spelling Checker, XSL Transform, etc. are also present in it. 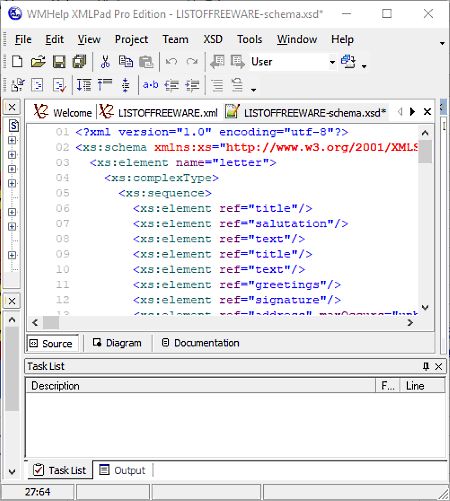 WMHelp XMLPad is the next free XML to XSD generator software for Windows. This software allows you to view, edit, and convert XML files to XSD. Plus, its multi-tab interface lets you work on multiple XML files at a time. Besides XML files, you can also work on XSD, DTD, WSDLL, DOCX, CSV, DBF, etc. files. Once you add an XML file to this software, you can immediately view the XML file content (XML code) on the interface. You can then choose to edit XML code using Editing options (cut, copy, paste, undo, redo, etc.) or you can directly convert XML to XSD.

To convert XML to XSD, you need to go to XML > Create Schema section. From this section, select the Generate new W3C schema to view the corresponding XSD code. Lastly, go to File menu and save the XSD code in the XSD file format.