UserBenchmark is my favorite software because it provides the most comprehensive RAM speed test results. I also like its ability to test and compare results of other components of a system.

UserBenchmark is a free RAM speed test software for Windows. This software is mainly used to test the performance of your entire system. However, it also shows the results of individual components including the RAM in which you can view the speed of your RAM module.

To test the performance of a system, this software performs a series of test like Integer test, Floating Number test, 3D Gaming test, RAM single and multi core test, RAM Latency test, RAM Bandwidth test, and more. The tests performed by this software are quite comprehensive but take slightly longer time when compared to other software to finish.

An option to only test the speed of RAM is also provided by this software that you can select to quickly find out the RAM speed. After completion of the RAM speed test, this software takes you to the UserBenchmark test results webpage where you can view RAM write speed, RAM read speed, RAM Frequency, RAM single core result, RAM multi core result, and RAM latency values. Along with RAM, it also gives speed test results of other modules of your system. On UserBenchmark results webpage, you can also view results of other systems which you can compare with your results.

This software provides the most detailed RAM and system speed test results. Plus, it is also quite easy to operate. 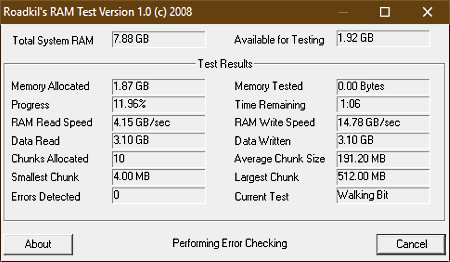 Roadkil’s RAM Test is a free and portable RAM speed test software for Windows. As it is a portable software, hence you can also use it without installing it in your system.

Through this software, you can find out RAM read and write speeds along with other important statistics of the RAM. In order to find the operating speeds of the RAM, this software performs a test named Walking Bit that takes around 20 seconds to finish. Immediately, after the test is finished, you can view the read and write speeds of your RAM in GB/sec.

Apart from testing the speed of RAM, this software also shows you number of errors if present in your RAM module. 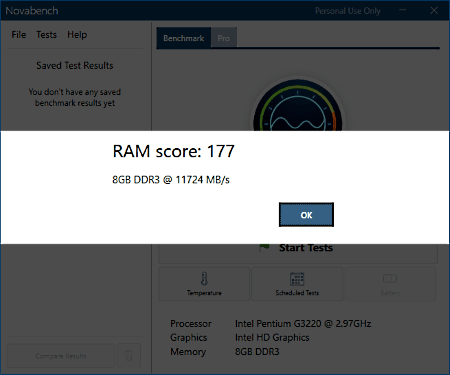 Novabench is another free RAM Speed Test software for Windows, MacOS, and Linux. It is primarily a system performance tester that tests different components of the system namely CPU, GPU, HardDisk and RAM. However, it also provides options to test only one component of your system at a time. After performing the test, this software gives a score that you can compare with the score of other systems to find out how fast the speed of your RAM or other system components are in comparison to other systems. In case of RAM, it also shows the actual data transfer speed of RAM in MB/sec.

It is a very good software to test RAM speed and the speed of other important system components. 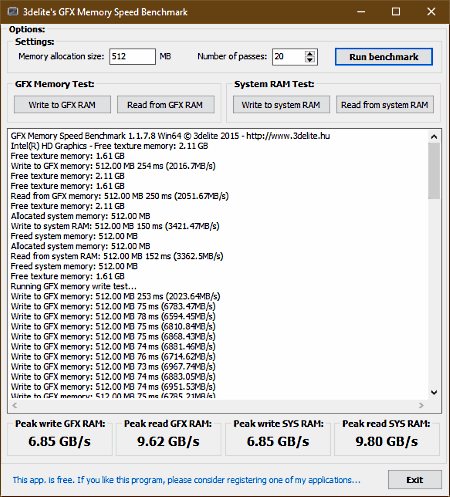 GFX Memory Speed Benchmark is yet another free RAM speed test software for Windows. Using this software, you cannot only test the speed of your system RAM, but you can also test the speed of graphics card or GPU RAM.

In it, you get separate options to test read and write speeds of both systems’ and GPU RAM modules. Before starting the test, you can also manually define the memory allocation size and number of passes to test the RAM speed. After the test, you can view the RAM latency, Peak write speed, Peak read speed of both system and GPU RAM modules as well as name of GPU, free texture memory size information, etc.

It is a simple and straightforward RAM speed test software through which you can quickly find out the speed of your system and GPU RAM modules.