This article lists best free lyrics downloader software for Windows users. While listening to a song, it might get frustrating to not know the exact lyrics of the song. In that case, downloading any of these freeware will help you find the exact lyrics of the songs. You can also listen to the songs in most of these software. All of them support MP3 music files, but many of them support other audio formats as well including WMA, FLAC, OGG, WAV, etc.

These lyrics grabber software let you import music tracks from your system, in order to download lyrics of each song. They fetch lyrics of the songs from various internet sources and display them on their interface. In some of them, the lyrics are displayed in scrolling mode. So, the lyrics are previewed in sync with the playing song in real time. You can also manually search for lyrics of a song with its title and artist name. Additional features like editing lyrics, saving lyrics in the music file, export downloaded lyrics as a TXT file, overwrite existing lyrics, etc.

While some of them are dedicated lyrics fetcher software, others are media players which also have an additional feature of finding lyrics. One of them is a plugin software which can be used with other media players. All of these software have some different features like music video lookup, audio metadata editing, fetch cover arts, etc. Explore the list to find out more.

Mp3nity is one of my favorite lyrics finder software. It has a simplistic approach in order to download lyrics. It displays the lyrics within a few seconds, which makes it desirable to use for the same. MiniLyrics is another favorite because it lets you view floating lyrics on your computer screen in a distraction free mode. 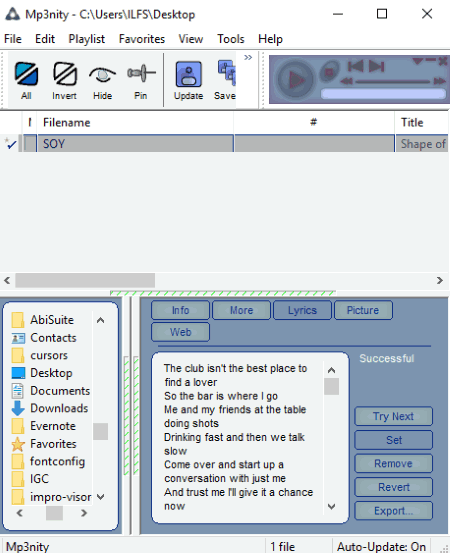 Mp3nity is one of the best lyrics downloader software for Windows. Using it, you can import a whole directory of music tracks or required music files to get their lyrics. The Lyrics tab present at the bottom of its interface lets you view the lyrics of the selected audio track. You can also view lyrics using the dedicated button present on its interface.

Now, there are two scenarios:

After first download of lyrics, the button will be changed to ‘Try Next‘. You can attempt to find lyrics from more sources by clicking on ‘Try Button’ again and again, until you’re satisfied with the lyrics result.

It lets you export the lyrics of a song in the format of  TXT file. Apart from that, you can remove lyrics from the song or revert back changes made to lyrics metadata tag.

Also, it can download lyrics for multiple songs simultaneously. After it finishes the batch lyrics download, you can view the lyrics of respective songs individually.

Along with lyrics download, it can also be used as album art grabber. You can fetch coverart for an album using it. It also lets you edit other metadata fields of songs, including title, track, album year, comment, genre, etc. In addition, you can also export whole table of metadata tags of music tracks as HTML document.

I really liked Mp3nity because it return results of lyrics quickly. Also, it provides an inbuilt music player. 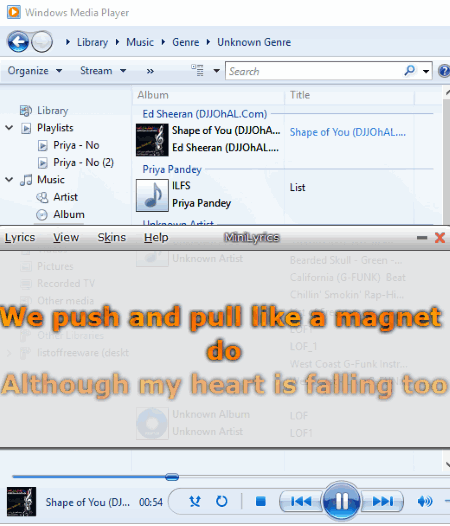 MiniLyrics is a different kind of lyrics downloader in this list. It is basically a plugin software to various media players including Windows Media Player, Winamp, VLC, iTunes, MediaMonkey, etc.

To start with, you need to set it up with any of the supported media players. I used it with Windows Media Player. As soon as you play a song in the connected media player, it automatically searches for corresponding lyrics and displays them.

It shows scrolling lyrics on its interface, in sync with the progress of playing track in real time. You can disable scrolling lyrics mode whenever you want. It has a crystal skin interface, which lets you view lyrics through other opened windows as well. You can change its interface skin as per your choice. ‘Floating Lyrics‘ option can be enabled to view lyrics in distraction free mode, while doing other activities on PC.

A Lyrics Editor feature provided in it lets you modify lyrics of an audio. You can highlight specific lyrics, text, change background color of edited lines, edit lyrics tag, etc. After applying changes, you can save edited lyrics in music files.

MiniLyrics is a feature rich lyrics finder software. It lets you rate lyrics, upload lyrics, change character encoding, and do more. You can also search for lyrics of a song by entering its title and artist name. 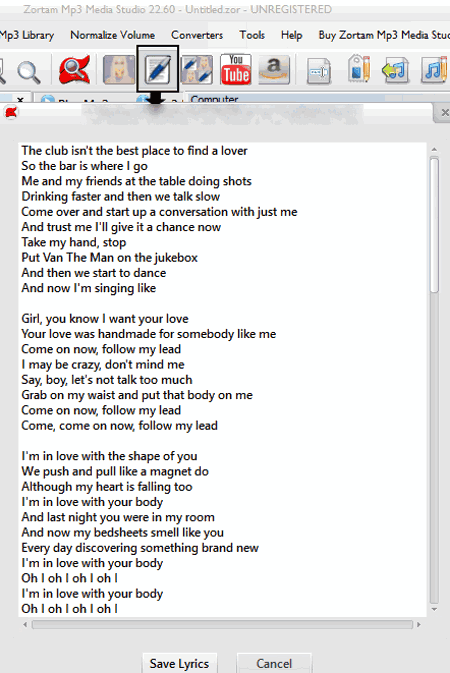 Zortam Mp3 Media Studio is another free lyrics downloader for PC users. Using its own file explorer, import your music library to its interface, select the track to get its lyrics, and click on the button ‘Get Lyrics‘ provided on its toolbar. It will fetch the lyrics of the track from the internet and show them in a new window. You can go through the lyrics, and also save them in the track.

It also provides a dedicated “Batch Lyrics and Cover Art Finder” tool on its interface. Using this feature, you can find the lyrics as well as cover images for a particular track. You can save both cover art and song lyrics in the audio track.

Not just that, it can be used for editing metadata of music files. Using Mp3 Tagging menu, you can add or modify many of tags in audio tracks. These tags include title, album, genre, year, BPM, artist, publisher, conductor, copyright, and many more metadata fields.

It also provides an audio player. So, you can listen to the tracks while reading their lyrics. It has a very easy and intuitive interface. It also displays lyrics of corresponding songs quickly. It supports only MP3 music files. 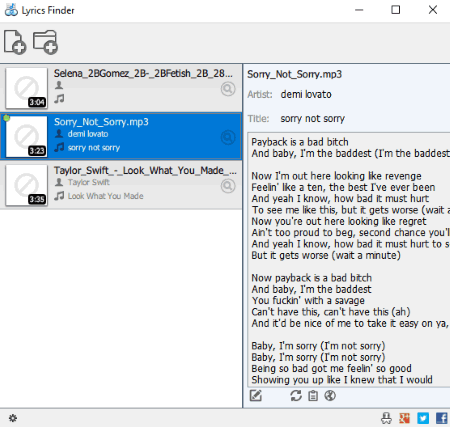 MediaHuman Lyrics Finder is another nice tool to download lyrics of songs. You can use it as a lyrics grabber in two ways, which are:

It provides an Edit option at the bottom of the Lyrics window. Using it, you can add text to the fetched lyrics of the songs. Also, you can refresh the tab and search lyrics with Google. In addition, you can change search engine to Yahoo, Bing, or Yandex by going to Preferences. You can also filter songs which already contain lyrics.

It also offers an option to export lyrics of a song as TXT file. But during testing, it didn’t work.

It is a dedicated lyrics downloader. It fetches the lyrics quite fast and has a simplistic interface. 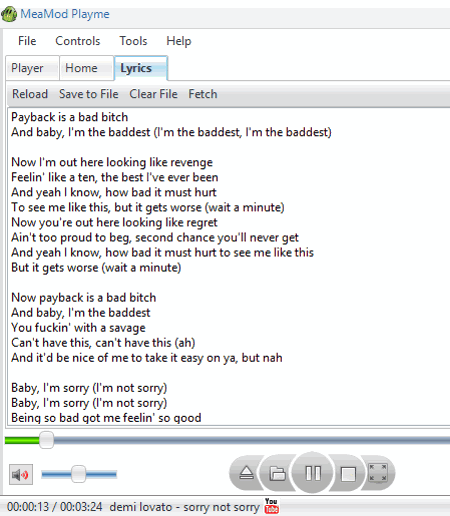 MeaMod Playme can be your another alternative for a lyrics downloader software. It has separate Player, Homepage, and Lyrics tabs present on its interface. Simply go to Lyrics tab and import an audio or a folder of audio files to download lyrics. In this tab, you will find four options named Fetch, Reload, Save to File, and Clear File. Just click on Fetch and it will show the full lyrics of the song. You can save these lyrics in the corresponding music file. Also, you can delete lyrics from a song if you wish to.

It also provide a feature of “music video lookup” to play the video related to the current track from the internet. You can select the desired Video Provider from Options menu, including YouTube, MTV Video, Yahoo Music, etc. 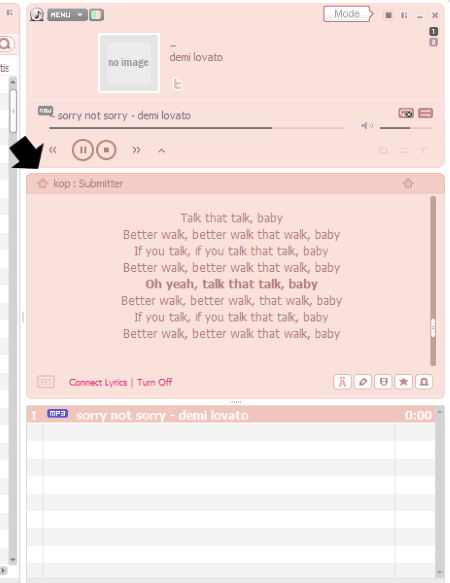 ALSong is basically a music player, which can also be used as a lyrics downloader. It provides a modular interface with different windows of playlist, songs playing, and the actual music player.

Just import an audio track to listen to it, and also to fetch its lyrics. In case the music file is already containing lyrics, it will display scrolling lyrics in the lyrics section (see above screenshot). If not, it will download the lyrics of respective song from online sources and display them in the same section. The lyrics are synced i.e. the lyrics that are currently running will be highlighted.

You can connect downloaded lyrics with the music file. It provides other options to Edit Lyrics, Enable Pronunciation, Report Incorrect Lyrics, Recommend Lyrics, and Search for Lyrics of a song online.

You can turn own ‘desktop lyrics bar‘ to display the lyrics in background. Meanwhile, you can do other tasks along with listening to a track with its lyrics. 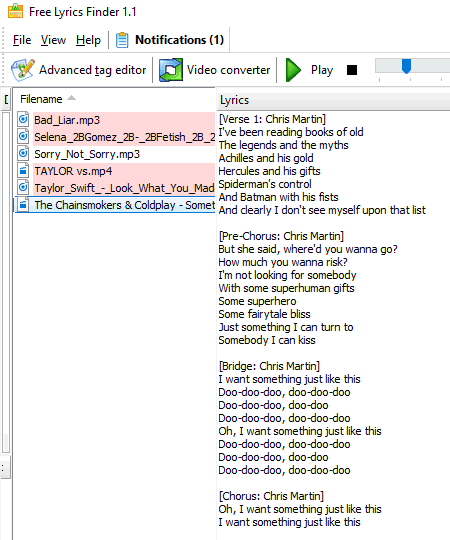 Free Lyrics Finder is same as its name suggests i.e. it finds lyrics for a particular audio track from the internet. Using its own file explorer, you can easily import a directory of music tracks to add to its interface. After that, click on desired track and hit the Find Lyrics button present on its interface. Or, you can simply press F2 key to let it fetch corresponding lyrics. The lyrics will then be displayed in a separate section as you can see in the above screenshot. You can also play the music from its interface while reading the lyrics.

It also lets you filter songs which don’t already contain lyrics in their metadata field. So, you can download lyrics for those tracks, and also save the fetched lyrics in the respective music file.

It is a very basic lyrics downloader with a simple user interface. It contains some functions which don’t work properly. For example, it has a Show Cover option, but it wasn’t displaying the cover art of the audio album during testing. Apart from that, it does what it does quite well. 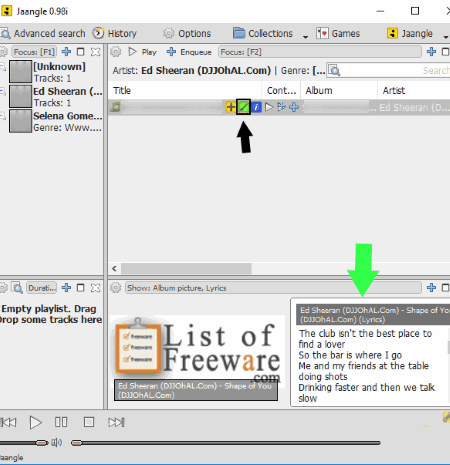 Jaangle is another lyrics fetcher software for Windows. It is basically an audio player, which lets you find lyrics of audio tracks as well.

Using Collections option, you can add a folder of music files to the software. Now, click on the green button (highlighted in above screenshot) to let it download lyrics of the song for you. The lyrics will be displayed in a section below the interface. That’s about it. You can read the lyrics while listening to the song.

You can also view and edit metadata tags of audio files of formats like MP3, WMA, OGG, FLAC, etc.

It is basic lyrics grabber software. It lets you change some interface preferences, customize hotkeys for music playback control, give ratings to tracks, and do more. 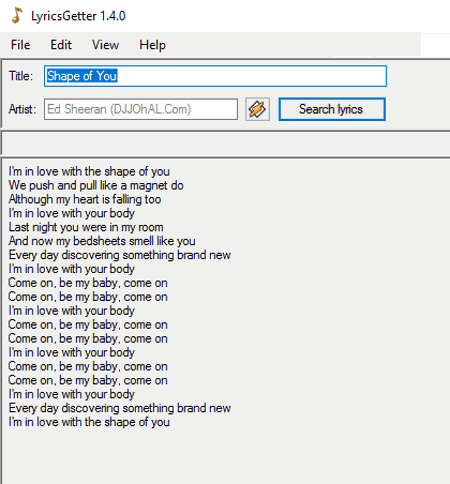 Lyrics Getter is a basic freeware to download lyrics. It lets you import MP3 music tracks to get their correct lyrics. As soon as you add a sound track, you will get respective lyrics. You can also manually search for lyrics of a song by typing its title and artist name. It lets you save the downloaded lyrics as a Text file. Or, you can even print the lyrics. You can also change the font (type, size, and alignment) of lyrics. General preferences like get it from system tray and taskbar, or display it over other windows, can be customized too.

Note: During testing, it wasn’t able to fetch lyric for some songs.