Here is a list of 11 Portable Text Editors for Windows. A portable program can run directly on a computer without installation. You can carry the program on a portable USB drive and run it on any computer where you have to work and use your favorite editor.

This list covers 11 free portable text editors, most of these editors also available as a regular program that you can install. Each program offers a unique feature set. In this list, you can find portable programming ranging from a regular text editor to powerful IDEs.

There are portable editors that come with a simple user interface similar to Microsoft Notepad but with additional functionalities. Those editors are a good fit for regular text editing and writing documents. Then there are programs that support programming languages and come with powerful features such as macros, search with regular expression, syntax recognition, spell checker, split editing, tabbed view, and more.

Notepad++ is my favorite portable text editor for Windows. This editor comes right between a simple text editor and a programming IDE. It is as simple as Windows Notepad but does not compromise in terms of functionality. It is a really good editor for long writing work with features like tabbed view, find and replace, macros, etc. Additionally, it also supports popular programming and scripting languages with syntax highlighting.

You can also check out our list of best free Open-source Text Editor, Open-source Font Editor, and VTT Editor Software for Windows. 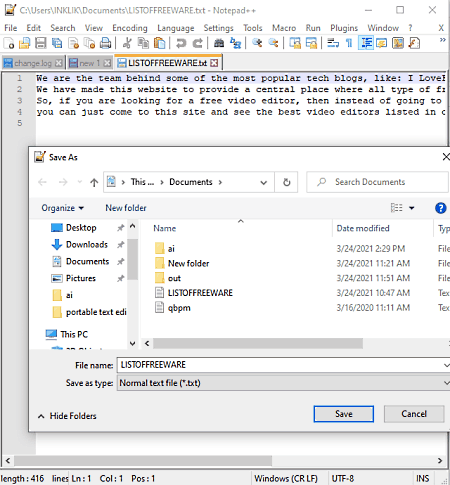 Notepad++ is a free open-source text editor that is also available as a portable application. Notepad++ portable version is the same as the regular version. It comes with a simple UI that users can customize to as per their liking. It also supports various programming and markup languages. This makes it a nice editor for regular editing and light programming needs. On top of that, Notepad++ packs features like find and replace with regular expressions, tabbed views to open multiple documents side by side with split editing, line operations, macro support, and more. 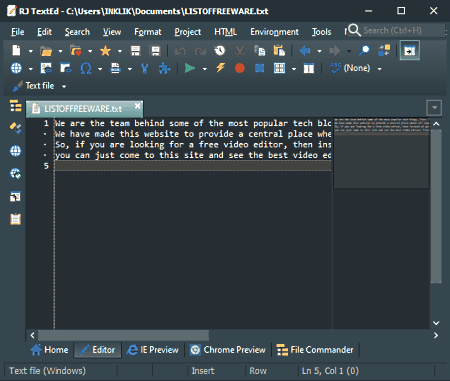 RJ TextEd is a free portable text editor for Windows. This is an open-source editor that has a graphically rich user interface. It can open multiple documents in the tabbed view and show the document map next to the editor. The editor supports split editing with a dockable panel that can be placed anywhere for ease. In terms of features, it supports HTML and CSS with syntax highlighting and HTML validation. It also packs a syntax editor and a color picker tool to make HTML edits easy. RJ TextEd comes with advanced sorting and a powerful find and replace feature that supports regular expressions. It also supports FTP and SFTP clients with synchronization. It can detect Unicode and ANSI code pages and convert Convert between code pages, Unicode formats, and text formats. 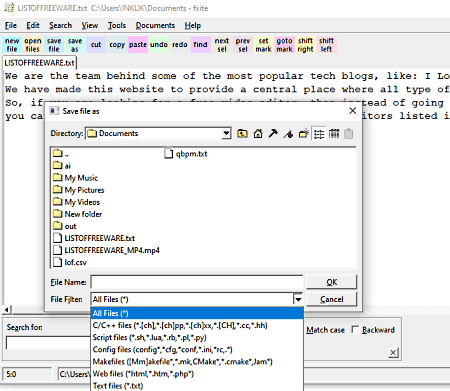 fxite is an open-source text editor from Google that is available as a portable program. It is a cross-platform program that brings a simple yet powerful text editor across devices. fxite has a simple user interface and supports over 40 markup and programming languages. It can recognize the syntax of supported languages and offers auto-completion while typing. It comes with a search and replace feature that supports multi-line regular expressions. Additionally, fxite has the Lua scripting engine and can be used to record and playback macros. 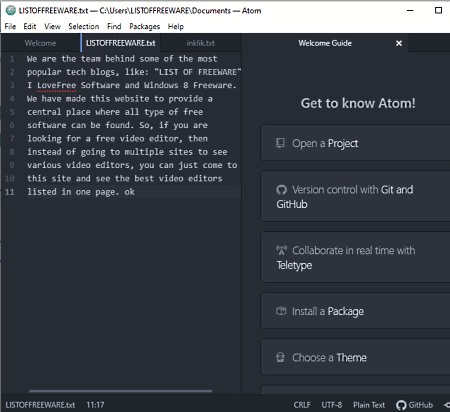 Atom is an open-source text editor developed by GitHub. It is a cross-platform editor and also available as a portable program. Atom is more suitable for programming and scripting needs instead of writing regular text documents. It supports various programming and makeup languages with features like syntax highlight, auto-complete, code snippet, etc. Atom has integration with GitHub and Git that allows forking code easily without ever leaving the editor. There is also a built-in package manager to extend the functionalities of the editor. 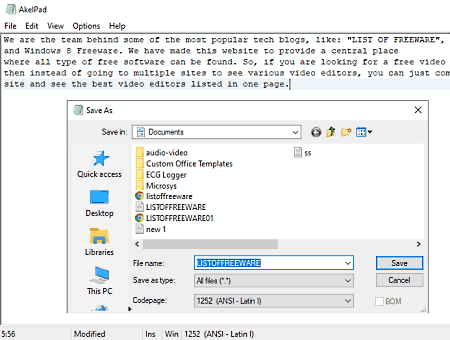 Akelpad is another free portable text editor for Windows. It is an open-source text editor which is available for macOS and Linux along with Windows. This editor has a simple Windows Notepad-like user interface with extra features on top. It has a multi-window view that allows users to open multiple documents side by side in tabs. It can preview open documents and select text column-wise for multi-editing. Additionally, Akelpad has plugin support that lets users add extra functionalities such as syntax highlighting, auto-completion, script execution, macros, etc. 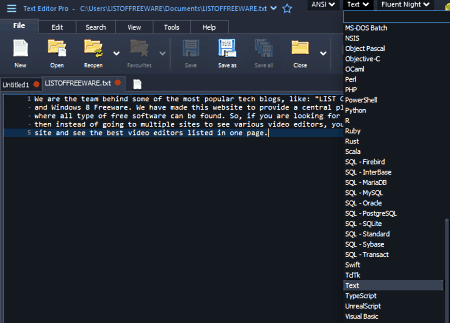 Text Editor Pro is a powerful text editor that comes as a portable program as well. This editor has a simple and neat user interface with big icons. Users can customize the UI with 300+ customization combinations. This editor supports various programming and scripting with syntax highlighting. It can compare documents, convert numerical units, show character maps, and search and replace text. Additionally, it shows a tree-view of the document directory with multiple directories supports including SFTP. 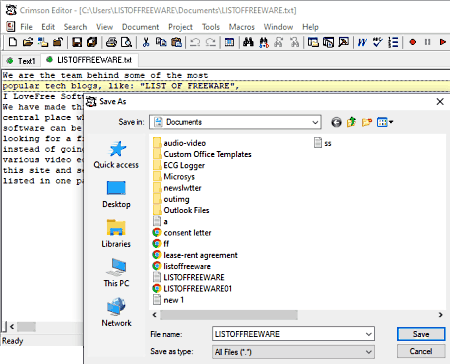 Crimson Editor is a powerful text editor for Windows. It is open-source and available as a portable program. This is a multi-purpose text editor that comes with a simple user interface hiding many useful features underneath. The editor can highlight syntax for various programming and markup languages. It supports a tabbed view to open multiple documents side by side along with a tree-view of the directory. Unlike any simple text editor, it has project support and can also record and playback macros. 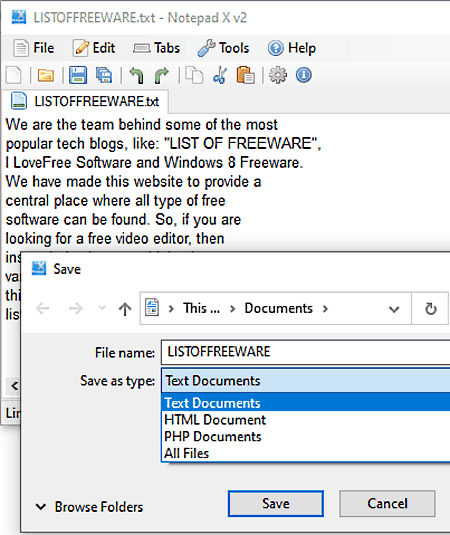 Notepad X is an open-source text editor for Windows. Along with the regular installer, Notepad X also comes as a portable program packing the same feature set. It has an interface similar to Mircosoft Notepad but with a toolbar at the top. The toolbar shows various editing and formatting options which can be fully customized by the users. It can also open multiple documents side by side and search across all the open documents. Additionally, it can recognize the syntax of various programming languages and file types. 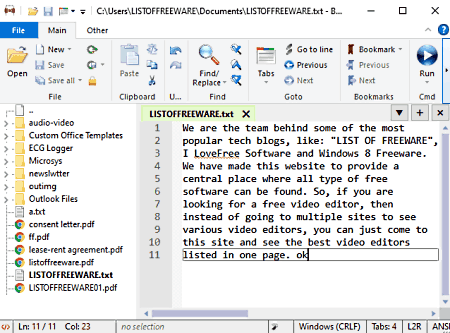 BowPad is a free portable text editor for Windows. It is an open-source editor that comes with Ribbon UI. The interface of this editor is very simple and neat. Everything is sorted and nothing is cluttered. It can open multiple documents side by side in a tabbed view. It also shows a tree-view of the directory of the documents. BowPad text alignment and format option right on the screen which makes it a really good editor for writing long documents. On top of that, it also highlights syntax for various programming languages and file formats. BowPad also has plugin support that can add more features to the editor. 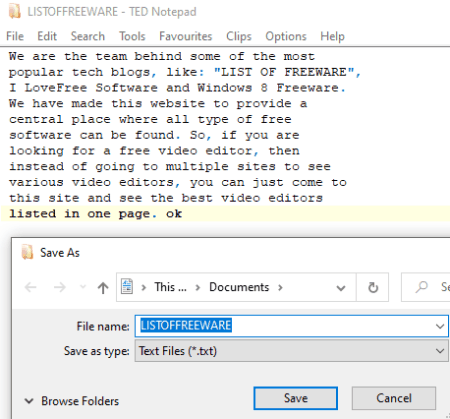 TED Notepad is a free portable text editor for Windows. It is a simple text editor packing powerful features. This editor is similar to Windows Notepad in terms of the user interface. But that simple user interface hiding many handy features for text editing. TED Notepad natively supports Grep, Sort, Cut, Unique, RegEx, Shuffle, Tr, Reverse, etc. It has a powerful insert feature that can add date, time, etc to the document. There are lots of editing features to make writing long documents easy. I recommend you to check the ‘Features’ page on the website before using this editor. 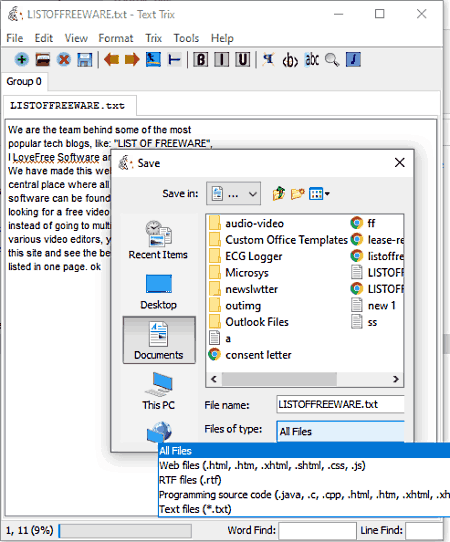 Text Trix is an open-source text editor with cross-platform availability. This editor is also available as a portable program. It comes with a handful of features that put it right in the middle of Windows Notepad and Notepad++. This editor has a simple user interface and can open multiple documents in a tabbed view. It highlights syntax for different file types and programming languages. It also comes with a built-in spell checker and plugin support. Users can write their own plugins and add additional functionality to this editor.