Here is a list of Best Free SKP to DXF Converter Software for Windows. These free software can be used to convert Google’s SketchUp model (SKP file) to AutoCAD Drawing Exchange Format (DXF). All these support SKP as input and DXF as output. Hence, you can import an SKP model, view and analyze it, and then export it to DXF format. These support a lot of versions of DXF format to convert an SKP file including AutoCAD 2004-2006, AutoCAD 2007-2009, AutoCAD 2010-2011, R12, R13, R14, etc. Besides DXF, you can convert SKP to various other 2D and 3D formats such as DWG, 3DS, DAE, PLY, OBJ, etc.

You can also modify the SKP file prior to conversion to DXF. Tools like draw shapes, draw lines, draw arcs, rotate, scale, move, push/ pull, paint, material editor, texture editor, pattern editor, and more tools can be used to edit SKP file. In these, you can also find various advanced viewing options, animation features, purging tools, material catalogs, 3D warehouse, and more features. One of these also provides a batch conversion feature to convert multiple SKP files to DXF and other formats simultaneously. Overall, these are feature-rich CAD software with additional conversion feature to convert SKP to DXF. Also, these are very easy to use, so you can perform the conversion without much hassle.

My Favorite Free SKP to DXF Converter Software for Windows:

DoubleCAD XT and SketchUp Make are both my favorites as you can convert SKP to multiple versions of AutoCAD DXF format. Plus, these support a lot more other formats to convert an SKP file.

You may also like some best free OBJ to DXF Converter, SKP to PDF Converter, and SKP File Converter for Windows. 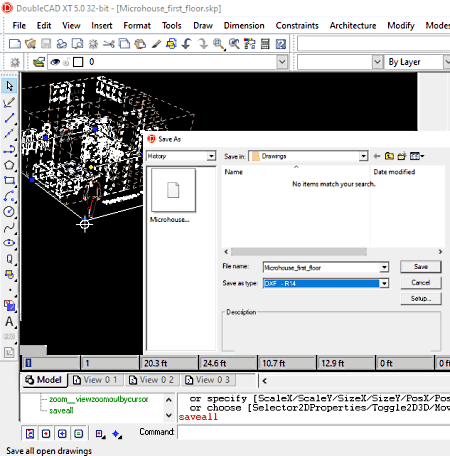 DoubleCAD XT is a free SKP to DXF converter software for Windows. Using this free software, you can convert a SketchUp file to various versions of DXF file like AutoCAD 2004-2006, AutoCAD 2007-2009, AutoCAD 2010-2011, etc. It also lets you convert SKP files to various other file formats like DWG, PLT, 2CT, 2CD, etc. You can also convert SKP to PDF format using its Print function.

It is mainly a 2D CAD software that offers a variety of design tools. You can use drawing tools, architectural elements, modify tools, hatch pattern editor, dimensioning tools, purge tool, insert raster image, and more to edit SKP drawing prior to conversion. Furthermore, it also provides you several view features to properly view and analyze a drawing including SKP. These features include pan, zoom in, zoom out, rotate, etc.

Let’s have a look at the SKP to DXF conversion steps now.

How to convert SKP to DXF in DoubleCAD XT:

It is one of the best free SKP to DXF converter software that supports multiple versions of DXF as well as DWG to open, view, edit, and convert. 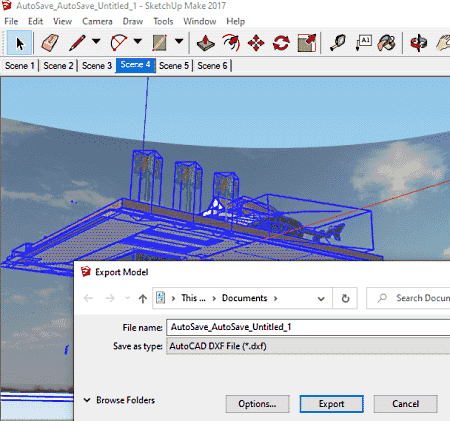 SketchUp Make is another SKP to DXF converter software for Windows. As its name implies, it is a dedicated SKP drawings maker software that lets you create different 2D and 3D models. It also lets you convert the existing model in SKP format to DXF and other formats like DWG, DAE, 3DS, FBX, OBJ, WRL, etc. You can also edit the SKP file before conversion using tools like draw lines, draw arcs, draw shapes, push/ pull, rotate, scale, paint bucket, etc. A lot of advanced viewing features are also provided in it, such as shadow, fog, edge style, face style, etc.

How to convert SKP to DXF in SketchUp Make:

It is another good SKP to DXF converter that also supports various other output formats to convert an SKP file. 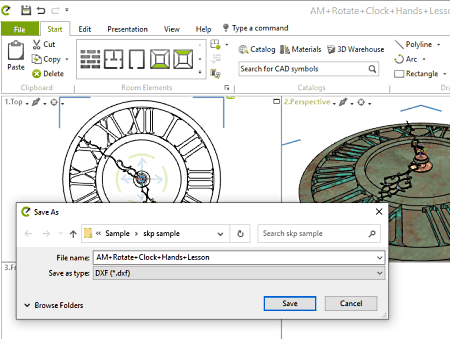 pCon.planner is yet another free SKP to DXF converter software for Windows. It is a 2D and 3D CAD software used for interior space designing. In it, you can also import and modify existing models in various formats including SKP, DXF, DWG, OBJ, 3DS, and more. You can also convert these models from one format to another, such as SKP to DXF, SKP to DWG, SKP to OBJ, OBJ to DAE, etc. It also supports various 2D image formats to take a shot of your model, such as SVG, PNG, TIFF, BMP, etc.

To perform the conversion, you can use its dedicated export function. You can edit the SketchUp model before converting it to DXF drawing using tools like extrude, sculpt, layer management, texture modification, material editing, rotate, scale, move, dimension tools, etc. After editing, you can convert SKP file to any other supported format. Let us checkout the steps of conversion now.

How to convert SKP to DXF in pCon.planner:

It is a comprehensive 3D design software that also allows you to convert an SKP model to DXF format. You can also design some powerful 2D and 3D models through it. 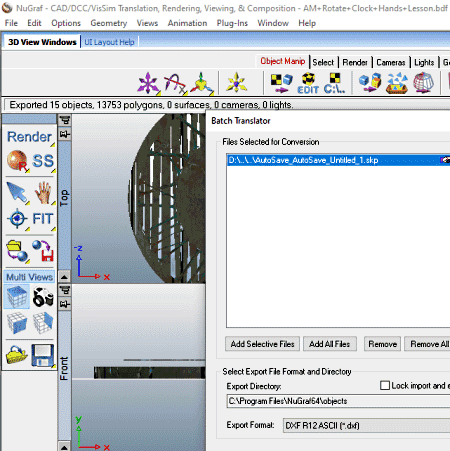 NuGraf is one more SKP to DXF converter for Windows. Using it, you can batch convert multiple files to DXF format at once. It is basically a 3D data translation and rendering software that provides a batch conversion feature. Its batch conversion feature allows you to convert a set of multiple SKP and other 2D/ 3D files to DXF format. Plus, a lot of other output formats are supported in it such as DWG, SLDASM, IGES, 3DS, STL, PLY, STP, etc. Let’s checkout how you can perform the conversion in it.

How to convert SKP to DXF in NuGraf:

In this free version of NuGraf, there is a major limitation that doesn’t allow you to convert every 5th polygon of each object in the resulting model.

It is a decent SKP to DXF converter which provides a batch conversion feature to let you convert multiple SKP files to DXF format. But, the limitation in its free edition kind of makes it undesirable. However, you can convert subtle and basic structures using it.